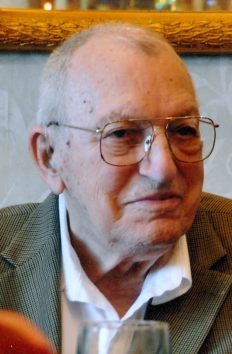 Zibia W. “Cy” Hosley, 92, a resident of Manresa Senior Living in Annapolis passed away January 8, 2013 at Anne Arundel Medical Center. He was born April 26, 1920 in Fayette, Maine to William C. and Ethel (Chesley) Hosley. Cy was raised on a farm in Fayette and attended public schools. He served in the United States Army from December 22, 1942 until November 29, 1943, when he was honorably discharged as a Corporal. He received his Bachelor of Commercial Science and Business Administration degrees from Southeastern University in 1952. Cy married Esther Julia Dandurand on January 2, 1945 and they lived in Massachusetts. In 1954, they moved to the Washington, D.C. and later lived in Suitland, Forestville and Bowie, MD where they resided for twenty six years. Cy had lived at Manresa Senior Living for the past year and a half. He was employed as an accountant for Arundel Sand and Gravel and also did tax preparation and later worked as a public accountant. He was a member of the American Legion and the Maryland Society of Accountants. Cy enjoyed genealogy and traced his family back to the 1700’s. He also enjoyed traveling, especially with his wife Esther in their younger years.

Cy was preceded in death by his wife, Esther and by a sister and three brothers. He is survived by a daughter Judith H. Mullen of Dunkirk and sons James W. Hosley and wife Theresa of El Cajon, CA and Jack G. Hosley and wife Michelle of North Beach. Also surviving are grandchildren Beth, Kyle and Kevin Hosley and great-grandchildren Jayden and Blake Gilbert.

It is with great regret learning just recently of “Uncle Cy’s” death as I had the pleasure of meeting him while stationed at Andrews AFB in Maryland, sometime around 1995. He shared with me a great deal of information on the Hosley family history (my wife’s family line). I am greatly indebted to Cy’s assistance and we lost touch some years back. While doing updates recently to information I already had, I noticed he had passed in 2013. Rest in peace. You were a great man and was able to do incredible amounts of research I now can do easily on the computer! Ernest and Faith Ann (Arsenault) Leduc, Las Cruces, New Mexico