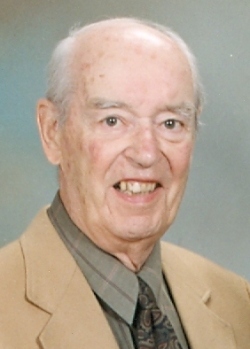 William Kennedy Chambers, 90, of Wheaton, MD passed away April 22, 2013 at Suburban Hospital in Bethesda, MD. He was born July 15, 1922 in Washington D.C. to Edward Ervin and Gertrude Elizabeth (Kennedy) Chambers. He was raised in the Capitol Hill section of Washington, D.C. and graduated from Eastern High School. Bill was employed at the Naval Torpedo Station in Alexandria, VA as an apprentice machinist before joining the United States Navy on July 21, 1943. While in the military, Bill earned the European Theatre, Pacific Theatre and American Theatre Ribbons, and the World War II Victory and Philippine Liberations Medals. He was honorably discharged on March 14, 1946 as a Gunner’s Mate Second Class. Bill married Margaret Leshko on October 18, 1947 and they lived in Wheaton, MD. He was employed by Washington Daily News as a route salesman, retiring in 1972. Bill was a member of the V.F.W. Post 2562 in Wheaton and the Wheaton American Legion Post 268. In his leisure time, he enjoyed being outdoors, fishing, gardening, and playing golf. Most of all, Bill loved spending time with his family, especially his grandchildren.

Bill was preceded in death by his wife, Margaret; brothers Robert and Edward Chambers and a sister Mae Burgess. He is survived by a son William R. Chambers and wife Kelly of Lusby and a daughter Judith L. Chambers of Hyattsville. Also surviving are grandchildren Elizabeth M. “Liz” and William P. “Billy” Chambers, both of Lusby and Cleo Chambers of Burtonsville, MD; a great-grandson Said Chambers, and many nieces and nephews.