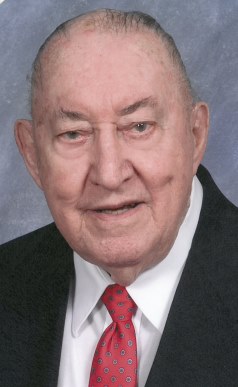 W. B. “Vandy” Vanderford, age 96, a former resident of Huntingtown, MD, passed away at Charlestown Retirement Community on September 14, 2013. Vandy was born to William and Sarah (Mize) Vanderford on April 9, 1917 in Maben, Mississippi. He was the last of 13 children and weighed only 3.5 lbs. at birth. He grew up on the family’s dairy and cotton farm and walked a mile each day to catch a school wagon for a 5 mile ride to Self Creek School. He attended Woods College, Mathiston, Mississippi, he also attended and received a B.S. degree in General Agriculture from Mississippi State University in 1939. Vandy was drafted into the U.S. Army in 1941 and trained in radio communications at Quantico, Virginia and Cove Point, Maryland. With the U.S. entry into World War II, he sailed to North Africa and fought in the Western Desert Campaign and Italy, transmitting Army commands and battlefield information and sending press releases for the journalist Ernie Pyle to major newspapers in America. He received a medal for his heroic actions while in Italy. Before leaving for North Africa, he met Margaret Virginia Norfolk in Maryland and they corresponded frequently throughout the war years. Then, following the war and after returning to the States in 1945, he married Virginia on September 22, 1945. The new couple had three children, Diane, Paul and Mary Jane. Vandy worked for the University of Maryland as County Extension Agent for Anne Arundel and Calvert Counties. He eventually earned his Master’s Degree in 1967 with a major in Extension Education and minor in Recreation. He received the Distinguished Service Award and Outstanding Agent Award during the 26 years with the Extension Service. Upon retirement in 1972, he acquired his real estate license and worked for Bright Acres Realty in Owings, Maryland for 12 years. After living all their adult lives in Huntingtown, Maryland, Vandy and Virginia moved to Charlestown Retirement Community in Catonsville, Maryland. Vandy cared for Virginia until her death in 2003. He was a member of Huntingtown United Methodist Church, The American Legion Post #85, and the Lions Club. Vandy served in many capacities in those organizations. He was an avid dancer and bridge player, excellent gardener and loved to travel. He was the life of a party and loved his children and grandchildren with great joy. Vandy is survived by his children Diane Gibson Lichtenberger of Ellicott City, Maryland, Paul Norfolk Vanderford of San Jose, California, and Mary Jane (Kirk) Wolter of Lake Forest, Illinois. His grandchildren, Drew Lichtenberger, Laura Lichtenberger , Asilinn (Tim) La Brie, Nycole Brooks, and Alexander (Hui-Jeong) Wolter and by nine great grandchildren.