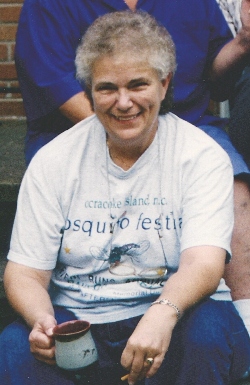 Victoria Lucy “Vicki” Wilson, 65, of Rose Haven passed away on August 8, 2012. Vicki is resting peacefully after many years of fighting her chronic illnesses.
She was born September 3, 1946 to F. Paul and Thelma Maeder. She completed her education at Southern High School after her family relocated from Chevy Chase, MD to Rose Haven., Vicki married John William (Bill) Wilson, Jr. of Friendship, MD in 1963, and they raised two children in Rose Haven. She and Bill later divorced.
Vicki was predominately a Mom and homemaker. Over the years she worked for a local marina and for her mother’s Beauty Salon, La Mer Beauty Salon, located in Rose Haven. She also worked in the pool and spa business. Vicki loved her family and friends and made the most of every minute spent with them. She loved to laugh, dance and listen to music. She enjoyed traveling, camping, and fishing, and was a devoted fan of the Washington Redskins.
Vicki is survived by her two children, their spouses and grandchildren, Lucy M. and Billy Franklin and their sons, Will and Zach Franklin, all of Friendship, MD, and B. Paul and Cindy Wilson, their son Sean and daughter Abby, all of Dagsboro, DE. Vicki is also survived by a niece, Joanne Nowatski of Calvert County, her current traveling companion Bill Disney, and by many friends. Victoria was preceded in death by her parents, a sister Paula Nowatski, and long time partner, Hank Tayman.

A Celebration of Life will also be held Saturday, September 22 from 2-6 P.M. at Vicki’s home.