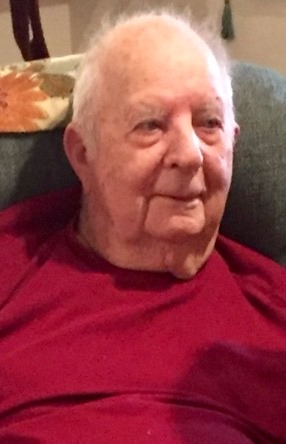 Vernon Louis McCready, 94, of Lusby MD (it was called Coster back then) went to be with the Lord on August 25, 2018 at Charlotte Hall Veterans Home. He was born in Lusby on May 17, 1924, the son of Maurice and Elsie Grace Coleman McCready. He was delivered by his Grandmother Ellen Thomas McCready who was a licensed mid-wife for Calvert County.

Vernon lived his whole life in Lusby, except for the last year in the VA Home. He was born in his parents home on Hungerford’s Creek. He was a waterman, and loved setting his trot line for crabs and fishing on his boat the “Double V”.

He began his working career in October of 1942 working for the Naval Powder Factory as a laborer. He served his country in the U.S. Navy from July 1943 through April 1946. He was proud of his tour and his time on the battleship the USS Washington. He returned to work for the Naval Ordnance Laboratory as an ordnance mechanic until 1972, then took on the duty of a motorboat captain until he retired in 1977.
He also loved wood working and built many small boats, building the last one when he was 88 years old. He and his brother Emmett were the owners and operators of the McCready Boatyard for many years.
He was a founding member of the Solomons Volunteer Rescue Squad and a member of Calvary Bible Church for over 60 years.

Thank you to his previous caregivers, Carla Humphreys Dudley, Susan Campbell and all the nurses and aides on 3B at Charlotte Hall Veterans Home. Your help and care for him meant so much.