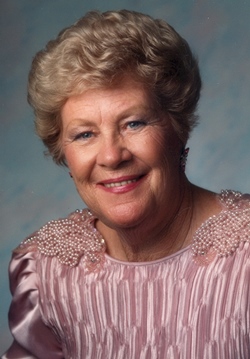 Theresa Margaret “Terry” Stinnett, 88, passed away August 14, 2015 at the University of Maryland Baltimore Washington Medical Center in Glen Burnie, MD. Terry was born December 1, 1926 in Brooklyn, NY to George F. and Mary E. (Tonry) Keegan. She was raised in Brooklyn and graduated from Catholic parochial school. She married Aubrey Phair and was a waitress in a family owned restaurant in New York. She moved to Washington, D.C. in her early 20’s, and later to North Beach where her family had a summer cottage. She worked as a waitress in the Rod n’ Reel Restaurant in Chesapeake Beach. Terry and Aubrey were divorced, and she married W. Gordon Stinnett and they lived in Chesapeake Beach where they raised their family and also owned and operated Stinnett’s Restaurant. She and Gordon also owned a home in Myrtle Beach, SC and after Gordon’s passing in 1993, Terry alternated between her homes in Maryland and South Carolina. For the past several years she was a resident of Brightview South River Assisted Living in Edgewater, MD.

Terry was a member of St. Anthony’s Church in North Beach and Our Lady Star of the Sea in Myrtle Beach, Stallings-Williams American Legion Unit 206 in Chesapeake Beach, and the Red Hat Society. In her leisure time Terry enjoyed being at the beach, fine dining, shopping, and spending time with her family and friends. She was also a fan of the Washington Redskins.

She was preceded in death by her husband Gordon, a daughter Linda O’Hara, a sister Kathleen Plourd and a brother George Keegan. She is survived by daughters Nancy E. Pease and husband Anthony of Bluffton, SC, LuAnne Smith of Myrtle Beach, Karen Amstutz and husband Charles of Sarasota, FL, and Lisa Merriman of Huntingtown; a son A. Garry Phair and wife Tammy of Venice, FL; eleven grandchildren and twelve great-grandchildren.