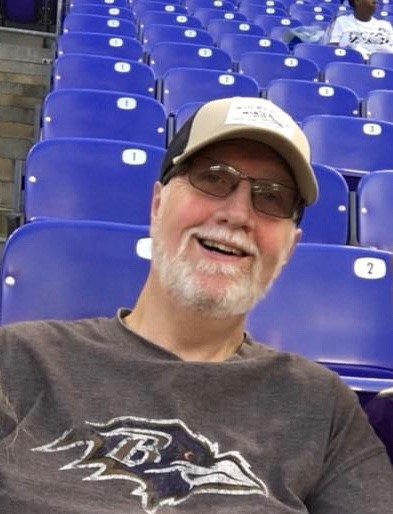 Terry Saxon Green IV, 65, of Rose Haven passed away June 22, 2020. He was born May 18, 1955 in Pensacola, FL to Terry Saxon III and Pauline (Bresnahan) Green. Terry was raised in Edgewater and graduated from Severn High School. He then attended and graduated from Towson University and later obtained his Master’s Degree from the University of Maryland. He married Janlyn Lint on September 6, 1980 and they lived in Annapolis before settling in Owings. They moved to Rose Haven in January of 2019. Terry was employed as a culinary arts teacher at Western Technical High School in Baltimore County, where he also coached lacrosse. He later became one of the founders of the HCAT Program at Anne Arundel Community College and continued to teach culinary arts courses until his retirement in 2011. Terry enjoyed traveling with his family to their cabin in West Virginia, trailing riding, teaching, entertaining, cooking, and being around people. He was also an avid fan of the Baltimore Ravens.

Terry is survived by his wife Janlyn Green of Rose Haven, children Brandon Green of Honolulu, HI and Kendall Green of Owings, a sister Karen Lambert and her husband Willie of Doswell, VA, nieces Samantha Oney and Rebecca Lambert and numerous cousins.

A memorial service and celebration of Terry’s life will be held at a later date.

Dear Janlyn, Karen, Brandon, and Kendall, We are so saddened by the loss of our beautiful cousin, your loving husband, wonderful brother, and loving father. He was such a good person, always happy and always smiling. We will miss him dearly and will always remember him saying from afar “Hey Cousin!” We love you Terry! Our prayers are with you all. Love Uncle John, Sherry and Al, Tony and Joan, Polly and Ray, and Tracy and John.

Janlyn,
I am so sorry to hear about Terry’s passing. My thoughts and prayers are with you.
Love and hugs,
Sandy

Hey Chef Green thanks for being my teacher and still being supportive even after we graduated. Class of 2000 will miss you and I’m glad that you got to be apart of my life. You will remain apart of my ❤️. Yes Chef!!! Job well done ✨

To all the Green family,
I am so sorry to hear of Chef Green passing. He was a life impacting teacher for me and many others at Western. My best memories in high school took place in the culinary walls and events. I will never forget and always be grateful that he talked me into switching into his class from cosmetology freshman year. He gave us so much of himself and his time. Thank you for all the years you shared him with us. In times like these so many people tend to say they are ” sorry for your loss”, but try to remember that nothing is lost if you know where it is. A better place, a beautiful sky, watching all of us. Prayers and hugs for such a wonderful teacher in my life:)

Thinking about you all right now. He was an amazing teacher and taught me from 99-03. He was definitely a blessing and the world is missing a fantastic human being right now.

Janlyn, I am so terribly sorry to hear of the passing of your husband Terry. Prayers for peace and comfort to you and your family during this difficult time.

My prayers go out to you and your family. To young to soon. I remember when we put our to infants together and Brandon had at least a 3” on my Jason. Terry was a great guy, wonderful host, phenomenal cook, and he will be remembered fondly and missed by thousands.

Dear Janlyn, Kendall and Brandon,
I am so glad you moved to Rose Haven in time for me to get to know how great a fella Terry was, Janlyn – and how much he loved you all.
I still picture him on that zero turn with his headphone music on, as he was mowing for us – and he would stop and talk and joke when he was done… he just never gave into all that he physically endured over the last decade and I think he truly enjoyed ‘decorating’ while you were on your homestretch at the courthouse, Janlyn. …now I see Kendall handling that zero just like her Dad! I know he was so proud of both you and Brandon..
Love and prayers during this tough season,
Fran

Janlyn, Kendall & Brandon,
We are so sorry to hear of Terry passing. His kindness touched so many people and he always made time for others no matter what he had going on. No words seem enough, but please know that our love and prayers are with you as you go through this difficult time.

Janlyn and children: So sorry to hear of your loss. I do hope your many wonderful memories bring you some comfort at this difficult time. May his soul rest in peace. Carol Schaffer

Prayers to the Green family.
Mr. Green was always so nice and funny. I will miss him xo