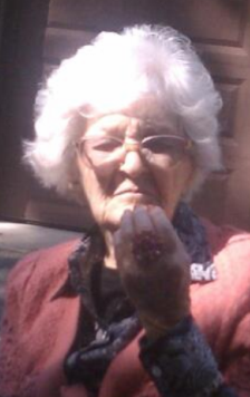 Tamiline Mae Reid “Nanny”, 96, of North Beach passed away November 21, 2012 at her great-grandson’s residence in Dunkirk. She was born May 31, 1916 in Weedonville, VA to Robert Paul and Lena Belle (McDaniel) Gregan. Nanny was raised in Weedonville where she attended public schools and graduated from King George County High School. She married Everett Davis Reid on April 3, 1938 and then moved to Washington, D.C. Nanny was primarily a homemaker until her children were grown. She was then employed at Stone’s Straw Factory in D.C. and as a packager at Safeway Food Stores, retiring in June 1974. After retirement, Nanny made and sold jewelry in a family owned flea market. She was a member of Forest Heights Baptist Church. Nanny enjoyed helping others, and she loved jewelry and country music.