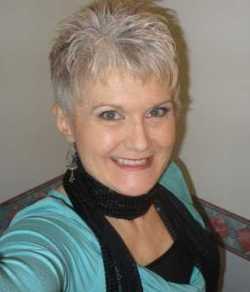 Sharon Denise Russell, age 56, of Lusby, MD passed away July 17, 2012 at Aria Frankford Hospital in Philadelphia, PA. Known as Shari, she was born September 22, 1955 in Prince Frederick, MD to Frederick Lyle and Judith M. (Pickrel) Hightower. She was raised in Chesapeake Beach, attended Beach Elementary and Calvert Middle School, and graduated from Calvert High School. She was married to Danny Linthicum and lived in District Heights, MD, raising their daughter April. Shari and Danny later divorced and she moved back to Chesapeake Beach, MD. She married Charles W. Russell October 31, 1983 and she and Charlie resided in Lusby, MD. In addition to being a homemaker Shari was employed at the U.S. Navy Department Office of the Comptroller for several years. She and a business partner, Michele Quesenberry, later owned and operated a gift shop called “Inner Equinox” in Solomons, MD. She was also a massage therapist and a Reiki Master. In her leisure time Shari enjoyed crafts and jewelry making, and was fond of shopping, watching movies, and dining out. She was a person who loved people and enjoyed spending time helping others.

Shari was preceded in death by her father Freddy Hightower. She is survived by her husband Charlie Russell; a daughter April D. Gray and son Jason A. Russell, both of Leonardtown, MD; a grandson Craig Gantt of Lusby; her mother Judie Turner of Indian Head, MD; sisters Darla Turner of Indian Head, Ellen Hightower Kronk of Lusby and Kelly Hightower McMillion of Frankford, WV; and other siblings Carl Jackson of Garrisonville, VA, Joyce Anderson of Kentucky, James Jackson of North Carolina, Judy Blazek of Spotsylvania, VA, Chris Hightower of Warrenton, VA, and Stephanie Myles of Renick, WV.