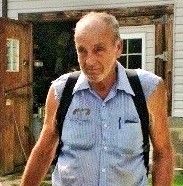 Samuel Frederick Woods, Jr., 80, of Huntingtown, MD passed away January 17, 2020 at Johns Hopkins Hospital, Baltimore, MD. Sam was born February 14, 1939 in Glendale, MD to Samuel F. and Lydia (Hylton) Woods. Sam was a soft spoken man with a huge heart. He was known by so many in the county and loved by all.

He was a lover of old cars and hauler of junk cars. He was an excellent car restorer, mechanic and race car driver.  He played a mean game of Keno and poker. He loved animals especially his cats and his dog Bear, he had a special kindness that drew animals to him.

He was preceded in death by his parents, brother Julian Woods, sisters Loucille B. Woods, Glida A. Driver and Janet Lanier and daughter Shirley M. Woods.

Surviving are his beloved wife of nearly 64 years Diane “Dee” Woods. But most of all, he was the best father to his 3 children Shelia A. Trainor and her husband Stephan of Prince Frederick, Samuel F Woods, III “Sambo” and his wife Margaret of Port Republic and Philip “Phil” C. Woods and his wife Lori of Prince Frederick; Pop Pop to his four grandkids Shanna, Bo, Austin and Samantha and two great grandkids Wyatt and Emi. To say he will be missed greatly is an understatement.

Uncle Sam to me was an amazing and caring Uncle. It is because of him that I learned so much about cars and restoration of them. He made such a huge impact on me and my life, so much so that my husband, Mark and I love tinkering in the garage and is part of life for us as well. Uncle Sam had the biggest heart and always gave pieces of it to all of those he cared for dearly. My first car was one he found for me and the only truck my Dad didn’t wreck was the one he got from Uncle Sam and restored with his assistance on a lot of stuff since my Dad wasn’t much of a car person. Uncle Sam basically did most of it. These memories and so much more engraved in my heart and I will cherish them forever. We Love You Uncle Sam!!! RIP

Sincere sympathy to Sams family. He was a good neighbor and friend. He will be missed by many. Please know we are here if there is anything we can do. God Bless and Rest In Peace Sam.

Sam was a great Brother-in-law. I will not forget the many poker games, helping him in his shed scraping paint off of his old cars and my Dad would do the welding. I can still see him sitting in his shed with his many cats. They were his babies after his children were all grown. He kept them warm with the old wood stove and each one had their own bed. I also watched him as he suffered from the pain of Paget’s disease. I know that he is up there sitting at a poker table with Mom and Dad, Uncle Phil, Lee, and Buzz. I know that he would not want anyone grieving but to know that he is no longer suffering. He will be waiting for us, with a smile on his face, when our time comes. He will surely be missed until then. Joe, Lynn and Joey

We are so saddened by the passing of Sam. He was a fine man and a good neighbor. The folks in the community will surely miss his genuine smile and pleasant personality. Donald and Pat Dove

A great man !! Lived to..& Loved to help everyone out !!!! When Sam knew he could or was helping us out his Smile would be as big as the person’s he was helping. Greed was definitely not is this Man’s vocabulary… The world needs a lot more like Sam…. Unfortunately there will never another to fill those shoes….. Sam will be dearly missed by Soooo many…. Thank you God for blessing us with Sam !!!!
Lord please comfort the family with their loss of such a great man RIP Mr. Woods
Respectfully
Rick Morrison

What a wonderful man. He was such a happy person. Always a smile on his face. And the love for his wife was written all over his face when she was near. Rest in peace Sam.

Back in the day we enjoyed bowling in leagues with Sam and his family. It was nice catching up with him a couple of months ago at Walmart. Our condolences to his family.

Our love and prayers go out to all. We have many fond memories hanging out at Sam’s garage. He was an honest, helpful and beautiful man. Such a gentle spoken man who had a heart of gold. He will be missed by many.
Keep his memory in your hearts and He will always be with you. God bless.
Frank and Barbara Brady

I met Sam almost 30 years ago through his son , my friend Phillip. Through the years Sam became a friend a teacher a man that always had a warm smile and a warm welcome to his home anytime i came to bring him his saturday coffee ! i am truly heartbroken today upon hearing this but i know you are doing well where you are . Sam , l know that i will see you again .For when i cross the river to rest under the shade of the trees i will see you there with the rest of my family waiting to greet me and we will have our coffee together once again . I love you pops .

My heartfelt condolences to Sam’s family. Sam was a dear, sweet man and will be missed by so many.

The Greenlee Family
4:52am

Dee and family,
Our love and prayers go out to y’all. He will be missed by many. Keep his memory in your hearts and he will always be with you. God bless, The Greenlee Family