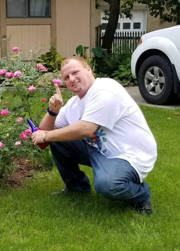 Robert Samuel “Robbie” Buckmaster III, 38, of Owings passed away November 26, 2018. He was born May 29, 1980 in Calvert County to Robert Samuel Buckmaster, Jr. and Vicki M. (Lewis) Stinnett. Robbie was raised in Calvert County and attended Northern High School. He was employed as a window installer for many years. Robbie loved crabbing with his grandfather, fishing, kayaking, animals and spending time with his family and friends, especially Billy, Russell and Danny Hall. Robbie was also a die-hard Redskins fan and will be remembered as a caring and kind-hearted person.