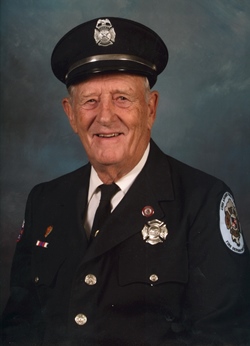 Robert Glenn “Spot” or “Bobby” Wilkerson, 78, of Tracy’s Landing passed away August 11, 2015 at Anne Arundel Medical Center. He was born April 12, 1937 in Friendship to John and Virginia (Webb) Wilkerson. Bobby was raised in Tracy’s and attended Tracey’s Elementary, and Southern Junior and High Schools, graduating in 1955. He married Kathleen Marshall on June 7, 1959 and they lived on the family farm in Tracy’s. He was employed as a produce manager for Safeway, retiring in 2000 after 37 years. Bobby was also a lifelong farmer, primarily raising tobacco. He was a life member of Deale VFD for over 65 years and also served as chaplain. He was inducted into the Anne Arundel County Firefighters Hall of Fame and was a member of Faith Assembly of God in Lothian. He was also selected into the Washington Metropolitan Slow Pitch Softball Hall of Fame in 2008. In his leisure time, Bobby enjoyed gardening, baseball, softball, the Orioles and Ravens and spending time with his family.