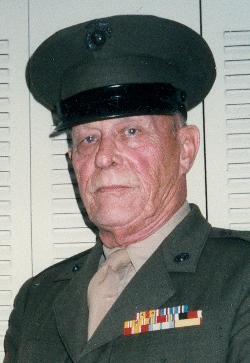 Robert E. “Bob” Crickenberger, Sr., 87, of Dunkirk passed away May 24, 2014 at his residence. He was born May 18, 1927 in Washington, D.C. to John and Margaret (Ellis) Crickenberger. Bob was raised in Washington and attended public schools, graduating from McKinley Technology High School. He served in the United States Navy from May 26, 1944 to June 16, 1946, during World War II and earned the Pacific Theatre, and American Theatre Ribbons and the World War II Victory Medal. Bob then entered the U.S. Marine Corps Reserve, and on March 1, 1951 entered the Corps on active duty, serving until January 24, 1963. He completed his reserve obligation on July 1, 1969, and was honorably discharged as Master Gunnery Sargent. Bob married Celeste Ann Brunori on July 10, 1948 and they lived in Washington, D.C. They also lived in Maryland Park, Hyattsville, and Clinton, and settled in Dunkirk in 1974. He was employed as a mainframe technician, installer and lineman with C&P Telephone Company. He retired December 30, 1984 as a PBX repairman and installer. Bob was a member of the Stallings-William American Legion Post 206 in Chesapeake Beach. In his leisure time, he enjoyed camping, boating, fishing, and spending time with his family especially his grandchildren.

Bob was preceded in death by his parents and a brother John L. “Jack” Crickenberger. He is survived by his wife Celeste B. Crickenberger, a son Robert E. Crickenberger, Jr. and wife Brenda of Chesapeake Beach and a daughter Linda Ann Giles and husband David of Prince Frederick. Also surviving are grandchildren Lorraine and Paul Crickenberger, Samantha Smouse, Jaime Abelitis, Melissa Giles, Megan Smith, and Corrine Bisbee, fourteen great-grandchildren and sisters Charlotte Lloyd of Virginia, and Margaret Leman of Waldorf.