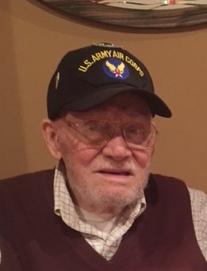 In WWII Mr. Scully was in the US Army Air Corps and was stationed in the China – Burma – India Theater flying equipment over the Himalayan Mountains to supply the Flying Tigers fighter squadron. After the war Mr. Scully was the President of Graham and Associates a printing company and film maker for the Arabian American Oil Company, which had offices in Washington DC; New York City; Rome; and Beirut.

Mr. Scully then went on to become the President of Design and Production Inc. from 1962 to 1985. D&P designed, fabricated and installed exhibits for the State Department, National Gallery of Art, Smithsonian Museums, and Presidential Libraries for John F. Kennedy, Jimmy Carter and Gerald Ford. And in addition, exhibits for World Fairs in the United States, Canada and Australia. Mr. Scully was a kind and generous man with a wonderful sense of humor who will be remembered and missed by all.

Mr. Scully’s first marriage to the former Jessica Hayden ended in divorce. He is survived by his wife of 29 years, Nancy D. Scully and his sons Robert Emmett Scully III and Edward Eugene Scully. He was also the stepfather of Coll A. Frost and Flint W. Frost.
He was the Grandfather of four, great grandfather of six, great, great grandfather of three He is also survived by many nieces and nephews. His daughter Mary Verna Barbee and stepdaughter Heather A. Frost and his brother Albert Scully all predeceased him.
Services are private. Memorial contributions may be made to the