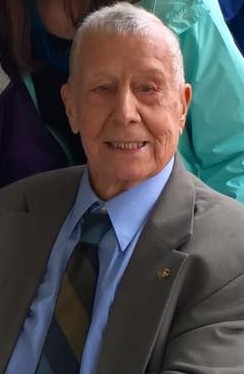 Robert was the devoted husband of Shirley A. Maxwell, who passed away March 28, 2016. Robert will be forever missed by his children, Karen Jernberg, Michael Maxwell and Diane Robison and their spouses Dale Jernberg, Lynn Maxwell and Jimmy Robison.

Poppy was especially proud of his grandchildren; Jaime Campbell and her husband Ray, Billy Bingham and Nicole Eddy, Michael Jernberg, Nicole Franklin and her husband Chris, Kevin Maxwell and his wife Jesssica, Lauren Robison and Amanda Fefel, and Ryan Robison. He was thrilled to have great grandchildren, Sean and Emily Campbell, Cash and Brayden Bingham, Emily Mulholland, Mekiah and Kingston Franklin and Corbin Maxwell. All of these children adored Poppy. He taught most of them to drive on the biddy buggy as well as giving them many life lessons.

Robert was preceded in death by his mother, Henrietta S. Maxwell and his father, William H. Maxwell. He was the eighth of 11 children, and leaves behind siblings, Dorothy Tyler, Paul Maxwell, Frances Himmelfarb, Stanley Maxwell and many other relatives and friends.

Robert was an electrician, working well into his eighties. Shirley and Robert retired to Port Republic, Maryland in 1988, after 29 years in Greenbelt, Maryland. He loved his home in Emerald Cove, known to his family as The Maxwell Plantation.
Robert was a very genuine, generous and kind man with no enemies. He was well loved by his family and friends and will be terribly missed by all that knew him.
The family will receive friends on Saturday May 28, 2016 at the Rausch Funeral Home, 4405 Broomes island Road, Port Republic, MD from 10:30 till the time of funeral services at 12:30 PM. Interment will be held in Arlington National Cemetery at a later date.