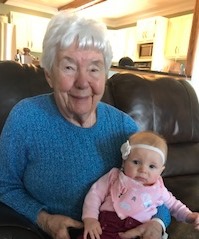 Pat Haynie, 90, at her residence in Solomons, MD, on February 9, 2018. Beloved wife of the late Russell Haynie and preceded in death by her daughter, Carol Ann Mulliken. She is survived by two sons, Ted Haynie (wife Laurie), Craig Haynie (wife Tootsie), grandchildren Michael Santangelo, Rusty Haynie (wife Michele), Brian Haynie (wife Jessica), and David Haynie as well as great-granddaughter, Lillian Grace Haynie.
Pat was born in Washington, D.C., and married Russell in 1948. They moved to West Hyattsville, MD, where they raised their family and she worked for several years in the guidance department at Northwestern High School. In 1972 they built a new home in The Willows Colony, Chesapeake Beach, Maryland, and Pat worked in the Calvert County Public School System until she retired. She became a full-time volunteer for the Calvert County Literacy Council and then was an active volunteer for the Chesapeake Railway Museum and the Bayside History Museum.

In lieu of flowers contributions may be made in her name to Emmanuel United Methodist Church or the Calvert County Literacy Council.