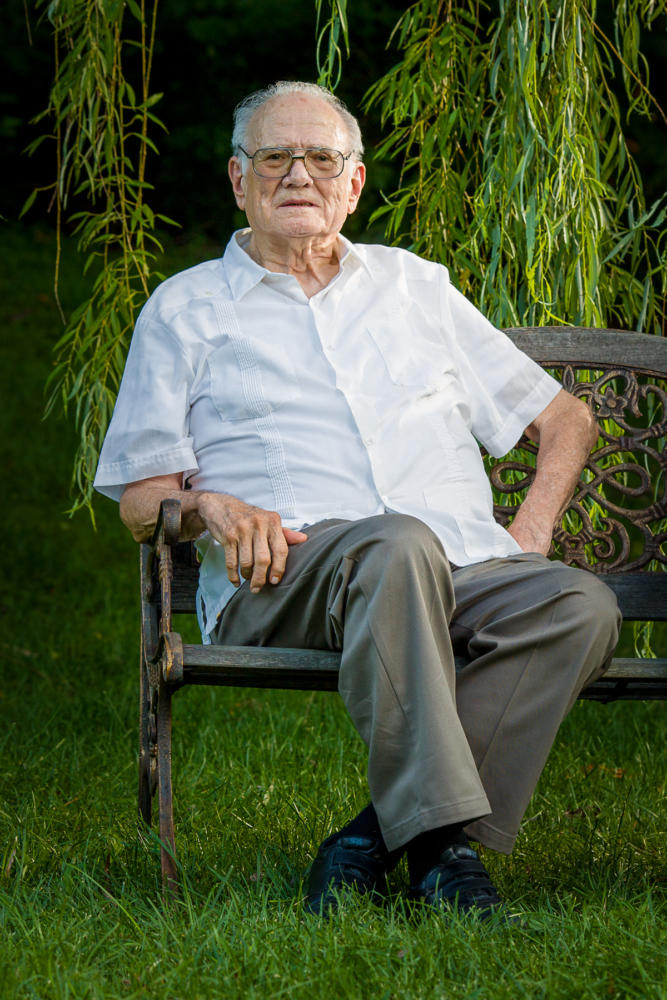 Orlando Antonio Gutiérrez, 92, of Lanham passed away September 27, 2020 at his residence. Orlando was born in Havana, Cuba July 23, 1928 to Flora Izaguirre and Antonio Gutierrez and was joined by his beloved brother Jorge in 1936.

He graduated high school from Colegio Baldor in 1945 where he developed an interest in engineering.  He received a scholarship to Rensselaer Polytechnic Institute in Troy, New York and graduated in 1949 with a degree in mechanical engineering.  While attending RPI Orlando met the love of his life on a blind date and married Helen LaBarge six months later.  They were married for 67 years until Helen’s death in 2015.

He began his career working for IBM in Cuba for several years. Upon receiving his US citizenship, he worked for the American Locomotive Company in upstate New York.  In 1961 he moved his family, which had grown to include his five children, to Sheffield Lake, Ohio to begin work as an aerospace engineer at NASA Lewis Research Center in Cleveland.  In 1972 he was named Coordinator of Programs for Spanish Surname Americans at NASA Lewis.  Orlando and Helen moved to Lanham, Maryland in 1982 as he took on the position of Hispanic Employment Program Coordinator for NASA at their headquarters in Washington, DC.

Orlando retired from NASA in 1992 but continued his passion of encouraging young people to embrace engineering as a career. He became active in the Society of Hispanic Professional Engineers, serving as President from 1993-95.  Through his work in this organization he promoted STEM for Hispanic students from high school through college. He described the mission of SHPE as an organization based on a process of self-help; our people helping our people improve at the college level, at the work level, at the precollege level. He received many commendations and awards for his work both at NASA and SHPE. Upon receiving an award in 2016 for his achievements and contributions to SHPE and the Latino community from the Phi Iota Alpha Fraternity at RPI he said, “Everything I’ve done, I’ve done out of love.”

Throughout his life Orlando was committed to community service. He began as volunteer firefighter in Scotia, New York in the late 1950’s. Throughout the 1960’s and into the early 1970’s he was a Scoutmaster, Assistant Scoutmaster, and Troop Committee Chairman of Sheffield Lake’s Boy Scout Troop 303. For over ten years he was an active member of the local Kiwanis Club.

Orlando loved his family, people from all walks of life, parties, and laughter. One of his favorite things in life was an annual ‘men only’ canoe trip that he enjoyed for over 40 years. This group of family and friends was known as the River Rats. He was originally invited to attend by his NASA supervisor in 1965 and fell in love with the annual event that originated in 1947. Over the years he included his sons, friends, son-in-law, nephews, and grandsons. He seldom missed a trip during these years, participating in his last trip in 2019 at the age of 91.  (His wife Helen always referred to the event as the “Scratch and Burp Weekend”.)

Orlando was a light and joy to all who met him. He will be missed beyond measure.

If you are attending the service please wear a mask and practice social distancing. For those who cannot attend in person, the service will be recorded and shared live starting at 11:15 using the following Zoom link:

There will be an opportunity for people attending on Zoom to share their memories of Orlando.

Orlando Gutierrez recruited me at a career fair at Rensselaer Polytechnic Institute (RPI) while I was pursuing my masters in Math. That is how at ended up at NASA Lewis (now NASA Glenn)/Cleveland, Ohio. He encouraged and provided advice to many of us engineers from Puerto Rico. My deepest condolences to the family.
Diana Centeno-Gomez

To Orlando’s family,
My friendship with Orlando goes back over 50 years.
Orlando’s smile, positive attitude and the never ending energy is what he always brought to any activity, event or program. He will be so greatly missed.
He was very successful as a NASA engineer, educator and national recruiter, at the NASA Lewis Research Center in Cleveland and later at NASA headquarters in Washington D.C. He always looked to provide opportunities to aspiring individuals through encouraging education, development and by providing employment opportunities. It was Orlando who led me to NASA.
I know the world is less today because of his passing, but better because of his life. With loving sympathy.

Orlando was a friend. A mentor. A teacher. He took me under his wings some 30 years ago when I started at NASA, as he did with many of my dearest colleagues and friends. He was always generous with his time, his wisdom, and his knowledge. I owe him a large debt of gratitude for all that he did for me and for NASA. We have lost a true pioneer and the real OG.

Orlando interviewed me and several college mates in 1975 at The Mayaguez Hilton, Puerto Rico. He then received my wife and I at the airport during our visit to Glen in 1976 for a view of the work being offered. Through the years we stayed in contact and laughed together remembering those early days. I owe Orlando for being the responsible person for NASA’s visit to Puerto Rico resulting in many years of hiring our engineers from the UPR in Mayaguez (CAAM). He will always be remembered as the reason many Hispanics were hired to work at NASA. God bless him and his family in these moments of sadness;however, I smile because heaven is about to be shaken by his visit! The party has started. QEPD.

Orlando recruited my wife and I to work at NASA Lewis Research Center. He looked after all his recruits to make sure we fit into the US culture and especially the engineering culture of NASA. I always remembered him playing catcher in our softball team, The Rum Runners. He and his beloved Helen were always at our parties and picnics. A true hero to all of us that had the privilege of knowing him. May he Rest In Peace next to his Helen.

My heart goes out to the Gutierrez family. What a wonderful & joyous human being with such humor and strength. Orlando had so many blessings in this life and I am sure he will receive lots more eternally. I will keep the family in my prayers. Peace be with you all.

After coming home from Vietnam in the early ’70s, I served young minorities and women, helping them integrate apprenticeship programs. As a role model, Orlando provided me and community activists of the day, moral leadership and wise counsel. Many of our community’s tradespersons entered NASA’s apprenticeship programs due to his advocacy and support. In 1981, he was on the Esperanza Inc. (previously known as the Cleveland Hispanic Scholarship Fund) inaugural board. I remember him using his rocket engineering skills to create blueprints for the design and building of the El Morro Kiosk. He then came to my home on Trent Ave. with saw and hammer in hand to help build the organization’s first fundraising venture. It was used on the site of the Puerto Rican Friendly Day Parade. Since then, the organization has awarded myriads of scholarships. His loving leadership style and visionary mindset will forever be missed.

My condolences to Orlando’s family. I only knew Orlando for a relatively short time but I really enjoyed any time that I spent with him. He was an amazing guy and I can only wish that my life be as full and accomplished as his was. Rest In Peace my friend. You will be missed.

What a great friend and someone I am proud to call an Real Card Player. He loved his family, the NASA family, his annual Canoeing family, and the Real Card Players. He was so proud of all the people in his life… and would tell and retell stories about them all.
I will miss my friend, and how he ‘took my money’ at cards. He was the BEST!

Sending my heartfelt sympathies to your family and sending deep gratitude and love to Orlando. I had the gift of meeting Orlando through Al many years ago. I will never forget Al’s loving connection to Orlando for his wisdom, guidance and actions designed to make this world a better place for individuals of all ages; a place where they can have equal access to opportunities that enriched lives in ways we will never know.

Orlando, thank you for the memories our family (Al, Alana & Andy) were given to us by your sweet presence in our life journey. I have a feeling the good work you advocated for continues after leaving this Earth. I can feel Al welcoming you with his open arms and heart!

We have the deepest sympathy for the family. I remember dancing Salsa with him and the other fun times we had while on the SHPE board. After one board meeting, I had the board over for a crawfish boil and he was making all sorts of crazy drinks. We didn’t feel too well the next day. The last time I saw him was when I was in DC for a education conference. We had a nice dinner remembering the past fun times. I will miss you friend.
Melissa Villegas Drake
And Family

Orlando made life for those who had the honor of his company significantly better. My interaction each year for only three days were highlights for decades. His perspective, sense of humor, insights, love for life, and love for all with whom he interacted (including me) made him a “one of a kind” who made those with whom he interacted better people. Gordon Gray

Condolences to everyone in Orlando’s family. I got to know Orlando via the real card player group. In that short time I came to know someone who lived life to the fullest and with passion. He was truly one of kind, we will be telling Orlando stories for years to come around the card table. Please take some solace in knowing that he made a positive impact on all those that got to know him. He will be missed and remembered. Kind regards, Tony Bulic

I had the great pleasure of spending time with “Orly” as a fellow “river-rat” – on the annual three day canoe/kayak event, during the past ten or so years. While the majority of the men were family members to either the Gutierrez or Gray clans, I was an outsider but was quickly treated by Orly as part of his family. He always spent time talking with me, asking about my life and sharing himself with me. In fact, I developed a warm friendship with him, as well as with his sons, son-in law, and frankly the rest of both families -that extends beyon the annual event.
Great families start with such loving patriarchs. May God Bless You Orly.