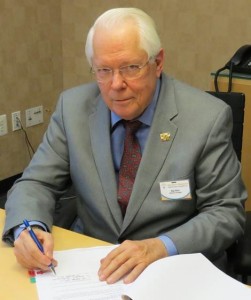 Maynard Kiplinger (Kip) Hine, Jr. died unexpectedly at his home in Lusby, Maryland, on December 27, 2015. He was born in Rochester, New York, in 1935 to Dr. Maynard K. Hine and Mrs. Harriett Foulke Hine. He completed his undergraduate education at Oberlin University and Indiana University. Prior to retiring to Lusby, Maryland in 1991, he had a distinguished career of more than 30 years as an engineer and administrator at the Department of Defense, primarily with Harry Diamond Laboratories in Washington, D. C. and Silver Spring, Maryland.
He was preceded in death by his parents and by his wife, Rosalie Woodall Hine. He is survived by a sister, Judith Hine Hyde, of Bethesda, Maryland and a brother, Dr. William C. Hine (Betsy) of Terre Haute, Indiana as well as four nephews, Kenneth Maynard Hyde (Nancy) of Springfield, Virginia, Patrick Kiplinger (Kip) Hyde of San Francisco, California, Dr. William Clyde Hine, Jr. (Michelle) of Zionsville, Indiana, and Dr. Charles Foulke Hine (Jenny) of Indianapolis, Indiana as well as two nieces Carol Taylor Franco and Nancy Taylor Filer, both of Florida, and by a cousin, Christina Hine Nelson of Urbana, Illinois. He is also survived by seven great nieces and nephews, Lauren and Nathan Hyde, Madalyn, Ellie, Cara, Christi and Josh Hine and by close friend, Margaret P. Fahs.
He was recognized at the 2015 Awards Dinner for the Calvert Library Foundation for his years of work with libraries in Maryland. He was the Chair, Maryland Advisory Council on Libraries, having been appointed twice to this office by the Governor of Maryland; he was the former President of the Calvert Library Board of Trustees as well as a twenty-year trustee; and, former President of the Southern Maryland Library Association. During his stewardship of the Calvert Library, it dramatically expanded its facilities and services to the public, becoming one of the finest public libraries of its class in the country. He was also active in the Patuxent River Power Squadron and often taught classes in marine navigation. He was also active in and a long-time board member with NARFE, National Association of Retired Federal Employees.
He was an avid photographer and especially like taking pictures of nature and his great nieces’ and nephews’ sporting events, but most especially of cherished family times at the beach.