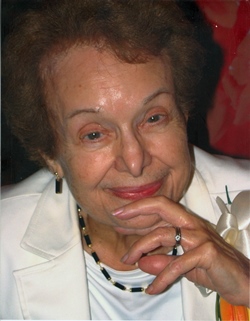 Marian D. Cole, age 87, of Dunkirk, MD passed away September 3, 2013 at Washington Hospital Center. She was born January 12, 1926 in Marietta, Ohio to Minor Wayne and Susanna (Evans) Davis. Marian was raised in Linthicum Heights, MD, where she attended school. As a young woman, she was a secretary with American Can Company and was later a legal secretary for a Baltimore firm. She married Ardis Michael Cole February 15, 1948 at Linthicum Heights Methodist Church. The couple lived in numerous places during her husband’s military career, her favorite which was Hawaii, where they spent three years. They retired and settled in Dunkirk in 1978.
Marian aspired to be a wife and mother, which she did lovingly. She and Michael raised 4 children and celebrated their 65th wedding anniversary in February 2013. Marian was an expert in mahjong, scrabble and crossword puzzles. She was also an excellent cook and was famous for her chocolate chip cookies. She was an avid reader and enjoyed murder mysteries and also enjoyed classical music and opera. Marian was active in the North Beach Senior Center and was a member of the Daughters of the American Revolution.
She was preceded in death by her parents, sisters Irene Ruppert and Susanna Williams and brother John L. Davis. Surviving are her husband Ardis Michael Cole; daughter Mary Eileen Covault and her husband Michael of Meridian, ID; sons James Michael Cole of Fresno, CA, Thomas Ardis Cole of Severna Park, MD and Russell William Cole and his wife Margaret of Laurel, MD. Also surviving are six grandchildren, Summer Cole of San Franscio, CA, Aynnie Miller and her husband Kurtis of Lafayette, IN, Rev. Ronda Gentry and her husband Stacy of Kingsport, TN, Sarah Davis and her husband Chadwick of Salt Lake City, UT, Evan Wells and his wife Baohong “Ruby” of Madison, WI and Emily Wells of Minneapolis, MN, and four great grandchildren.
The funeral service for Mrs. Cole will be officiated by her granddaughter Rev. Ronda Gentry, an ordained Baptist minister.