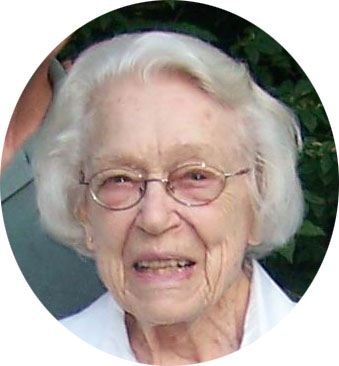 Marguerite Stephens Sheridan, age 100+ died at her home, Lusby, MD on August 18, 2013.
She was born, May 31, 1913, in New York City, NY to the late Roderick Stephens and Marguerite Dulon Stephens. Marguerite Stephens was raised in Scarsdale, NY with her two brothers, Olin and Rod. After her marriage in 1936, she and her husband, Robert (Sheridan) lived outside Rochester, NY, where they brought up their three children. They retired to Dorset, VT in 1971 to the house they designed and built over the preceding ten years.
Among Marguerite’s passions was the great outdoors: gardens of ferns, flowers and vegetables; songbirds and wildflowers she discovered on hikes. Her first love was always her family for whom she made home a very special place.
Following her husband’s death after 66 years of marriage, Marguerite moved to Wildewood Village in California, MD, and finally to her daughter’s home in Lusby, MD where she died peacefully with her family by her side. She is survived by her 3 children and their spouses: Susan and Frank Parish, Richard and Nancy Sheridan and Frances and Kenneth Bushee, nine grandchildren and twenty two great-grandchildren. A private family gathering will be held at a later date in Vermont.