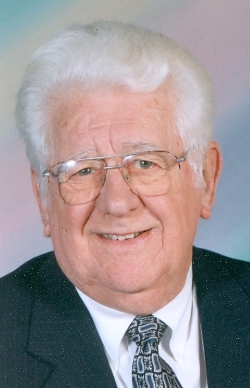 Kenneth Eugene “Ken” Stith, 87, of Dunkirk passed away February 2, 2012 at his residence surrounded by family. He was born February 17, 1925 in Carthage, MO to Lee and Helen (Weaver) Stith. Ken was raised in Hannibal, MO and later moved with his family to Iola, KS where he graduated from Iola High School in 1943. He enlisted in the United States Army on July 3, 1943. While in the Army, Ken fought in the Battle of the Bulge and was awarded the Bronze Star, Good Conduct, American Campaign, European-African-Middle Eastern Campaign, World War II Victory, and Army of Occupation Medals and the Victory and American Theatre Ribbons. He was honorably discharged as a Private First Class on March 13, 1946. Ken married Betty Eakin on September 7, 1946 and they lived in Washington, D.C. He was employed as an automotive electrician and later owned and operated Central Brake and Alignment in Silver Spring for twenty five years, retiring in 1991. Ken was a member of the 75th Infantry Division Association and was an active member of Christ Congregational Church in Silver Spring. After retirement, he was very involved in community service, especially helping those in need. In his leisure time, Ken enjoyed sports and was an avid Washington Redskins fan, and he also loved spending time with his family.