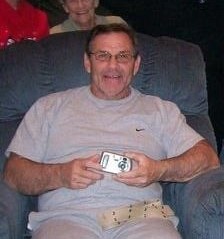 John Douglas Wright, “Doug”, 72, of Huntingtown, Maryland passed away on October 25, 2020 at Charlotte Hall Veterans Home, Charlotte Hall, Maryland. He was born on January 16, 1948 in Washington D.C. to the late John Henry F. and Dorothy Lee Taylor Wright. Besides his parents, Doug was preceded in death by his wife, Mary C. “Kathy” Wright and his siblings, Joyce Martin and Donald “Bo” Wright.

He is survived by his two sons Frank Wright (Kelly) and Chuck Lewis; grandchildren Austin and Adam Lewis, Dakota, Shane and Mackenzie Wright. He is also survived by great-grandson Cameron Lewis and sisters Linda Childers (John) and Jeannie Duffy Wright.

Doug served in the US Marine Corp and was a Vietnam Veteran. He received his Honorable Discharge from the Marines on August 18, 1973 at the Rank of Sergeant. He was awarded the National Defense Service Medal, Vietnam Service Medal w4/*, Combat Action Ribbon, Navy Unit Citation, Vietnam Campaign Medal w/device and a Purple Heart.
Doug loved high school sports; he played Varsity football and boxed for many years. He enjoyed motorcycles, watching his grandchildren play sports and spending time with family.
Doug and his son Frank together ran a company that serviced the Petroleum Industry that Frank has been able to carry on. Doug was a workaholic and loved working closely with his son every day. He loved his family and will be deeply missed.

The family will receive friends on Friday October 30, 2020 from 6-8 PM at the Rausch Funeral Home, 4405 Broomes Island Road, Port Republic, Maryland 20676. Doug will be buried on Friday November 13, 2020 at 11:15am with Military Honors in Maryland Veterans Cemetery, Cheltenham, Maryland. Memorial contributions may be made to either Charlotte Hall Veterans Home or Hospice of St. Mary’s.

R.I.P. Marine 🇺🇸Your work on earth is done but you will never be forgotten
Very Proud to be your friend

Thoughts and Prayers to you and your family. Your Dad will truly be missed by all. Semper Fi Marine 🇺🇸

God saw you getting tired
And a cure was not meant to be.
So he put his arms around you
And whispered ‘Come to Me’.
With tearful eyes we watched you
As we saw you pass away.
Although we loved you deeply,
Your Golden Heart stopped beating,
Hard working hands at rest.
God broke our hearts to prove to us.
He only takes the best.

Those we love remain with us
For love itself lives on,
And cherished memories never fade
Even though a loved one is gone,
Those we love can never be
More than a thought apart,
For as long as there is memory,
They’ll live on in the heart.

John Douglas Wright, you were all I could ask for in a brother-in-law. From the time I met your sister Joyce fifty five years ago and married her two years later, it was always a pleasure to be in your company. Now you have joined your beloved family members and friends who have departed this earth ahead of you and are in the bosom of the Lord.
You touched so many lives with your kindness, caring and loving nature. You and I became even closer over the last twenty or so years and Joyce so dearly enjoyed your stopping by weekly just to spend time talking and sharing about each others daily lives and expressing the love you both shared for one another. Be assured that you will be missed by everyone whose life you have touched. It has been a true privilege to be a part of your family and to have such a close friend as yourself.

On behalf of myself and my entire family we wish you farewell until we meet again on Heaven’s beautiful shores.
Semper Fi fellow Marine.
Rest in perfect peace.

Praise God he freed you from this earth to be with him, Kathy, Joey, Mom, Dad, Joyce, Bo and the twins. You all will be in our hearts forever. So proud of Frank & Chuck they toke care of Kathy & You and was with both of you till the last breath. I am praying they find peace through God.

We offer our thoughts and prayers to Doug’s family and many friends.
We’ll remember your All Central Maryland Football days, The Golden Gloves, the Vietnam years, how you turned your Job into a Successful Business.
How Cold it was the winter you fixed our old furnace.
The great joy you found in your family, friends and especially the grandchildren.
We remember.
John & Linda Childers Sr

Prayers to Frankie and all Doug’s family. A long time friend and Viet Nam brother who will always be remembered.
Had a lot of good times and ball games together Semper Fi Bulldog and God’s speed.
Rock & Karen

There are no words that can describe how sorry I am for your loss. Please accept our condolences and deepest sympathy.

I am wishing everyone who loved my Uncle Doug peace and love today, especially Chuck and Frank. It has been such a hard few years. I hope that soon you will begin to have more and more of the happy memories come back to you.
One of my favorite memories was, as a little girl, Uncle Doug’s Amazing, powerful voice, I could hear it from what seemed like a mile away. I remember all the picnics, when I could hear him and Pop talking, (not even yelling!) Mom Mom and Kathy and all the Aunts were standing near, you could see them laughing. I remember one sunny day when they were playing a crazy game of horseshoes, one ringer after another and messing with each other. It was such a wonderful day, such a warm and happy time. I hope that it is a fantastic game of horseshoes up in heaven right now. If I’m quiet, I bet I can hear them from here. Hugs to you all.

Dear Frank and family. I was very saddened to learn of the passing of Doug. We spent many years working together at Petro Services and it was wonderful working with him. I always knew when Doug got back to the shop as I could always hear his distinctive voice from out in the
yard before he got to the office.
No one can prepare you for a loss; it comes like a swift wind. But take comfort in knowing that
Doug is now resting in the arms of our Lord. Our deepest condolences to you and your family.

In the 1980’s working for a petroleum contractor in College Park, MD, I met Doug Wright when he was working for Amoco Oil and knew him during his years at Petro Services. He was very knowledgeable in the petroleum industry and will be missed. My deepest condolences to his family.

A true presence walking the halls of Central High School and a madman on the football field. We also had Concert Choir together. Thank you for your service and may you rest in peace.

Frank, thank you for calling me to tell me of Doug’s passing. I have just written a remembrance note to you and Kelly which I will mail tomorrow. I had the pleasure of meeting your father and working with him during my time with Amoco in the Baltimore District Office in the late 80’s / early 90’s. It was a true honor to have met him (and Kathy) and I am extremely grateful to him for the help, knowledge and kindness he extended to me. I am flying the US Flag here at my home in Texas in honor of your father. May he rest in peace. I shall miss talking with Doug.

Sue Wright / Oct 30th 2020
Doug you will be missed by many. I know you are with Kathy now. Your Mom and Dad and Joyce and Bo will surround you. My heart will always be with your family left here.

You’ll be missed by many people uncle Doug. You and Bo had the gift of making the people around you smile and that’s a pretty special gift and I’m lucky that you shared that gift with me every time I was with you.

I remember playing that handheld football game with you on a bunch of Sunday mornings. It’s amazing to me now that you gave so much undivided attention to that crazy little kid. That meant a lot to me. I remember Frankie and me watching movies (movies my parents definitely didn’t approve of) at your house. Sleepovers at Frankie’s house were the best

Frank – You and your family have had to deal with so much pain over the past couple of years. Just remember you’re not alone. Your dad lives on in your hearts and in your minds and the hearts and minds of our entire family.