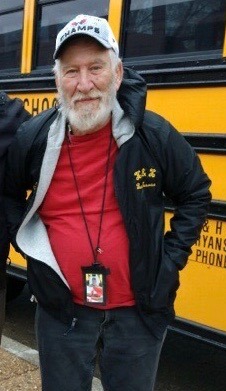 James Olin “Jim” Harold, Sr., 75, of North Beach, MD passed away February 27, 2020 at his residence. Jim was born September 14, 1944 in Washington, D.C. to Ana (Conrad) and Olin Harold. He grew up in Cheverly, MD and graduated from Bladensburg Senior High School in 1962. He enlisted into the Air Force in June, 1962, serving for eight years and rose to the rank of Tech Sgt. He was stationed at many places but his most talked about and fondest memory was his transfer to Elmendorf Air Force Base in Anchorage Alaska. He and his family drove from Maryland to Alaska in the winter and it was quite an adventure. After eight years in the Air Force he got out and worked for C & P Telephone Company, which is now AT&T, and worked as a Computer Programmer Supervisor. He retired from AT&T and resided in North Beach for 28 years. After his retirement he was a truck driver and most recently a school bus driver in Charles County, MD. He loved sailing all over the Chesapeake Bay and loved sailboat racing. Over the years he loved motorcycle riding and working on cars. He was an avid NASCAR fan and he watched the races from home as well as traveling to the races.