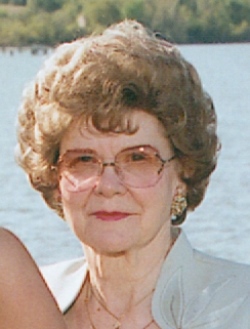 Helen Louise Swartz, age 87, of Silver Spring, MD and a former resident of Upper Marlboro, MD passed away August 24, 2013 at Holy Cross Hospital. She was born November 20, 1925 in Harrisburg, PA to Kemper Lee and Isadora (Geil) Messick. She received her education in Harrisburg and was married to Robert Earl Swartz November 19, 1949. Helen moved to this area in 1963 and resided in upper Marlboro from 1970 until moving to Riderwood Village in 2011. She was employed as a health aide with the Prince George’s County School System until retiring in 1987. Helen was always a sports fan and she enjoyed following the Washington Redskins and New York Yankees, but after her retirement, she became and avid golf and bowler.
She was preceded in death by her husband and her 10 older siblings. Helen is survived by her daughter Sandy L. Shimp of Dunkirk, MD and a granddaughter Gretchen L. Thomasson and her husband Forrest of Key Largo, FL.