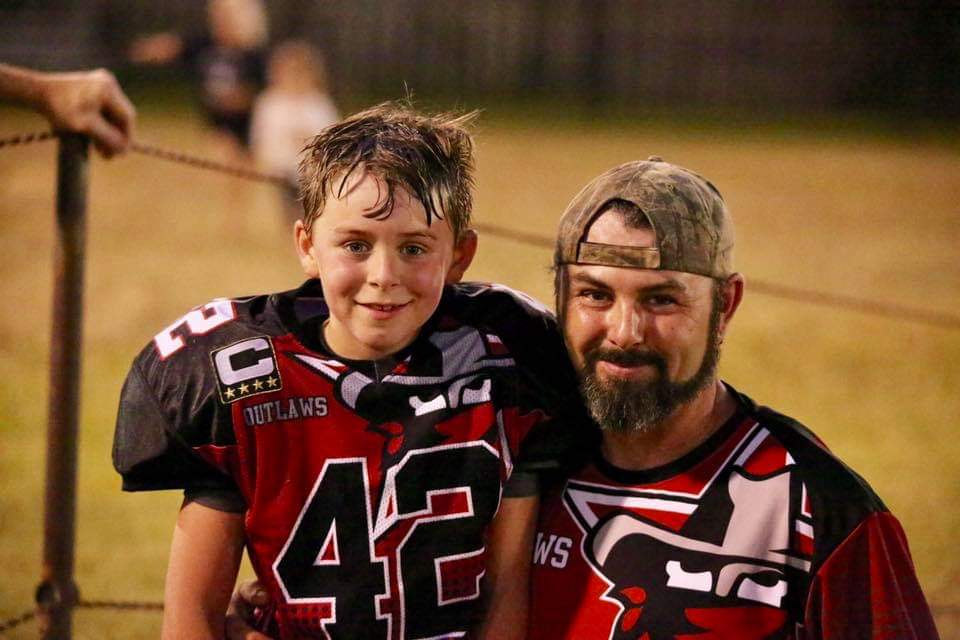 David Michael “Dave” Jackson, 37, of Owings passed away July 22, 2020. He was born November 16, 1982 in Prince Frederick. David was a lifelong resident of Calvert County. He grew up in Chesapeake Beach and graduated from Calvert High School. David married Stephanie Bell on July 18, 2008 and they recently celebrated their 12 year anniversary. He was employed as a union ironworker for Ironworkers Local Union 5 and worked for Hutchinson/United Rigging. David was an extremely proud and hardworking ironworker who loved his job and found great joy in working alongside his father. David loved spending time with his son Colton and was very involved in the Owings Outlaws Football Team. He also enjoyed hunting, tools, and fixing just about anything. David was a loving father, husband, son, brother, and friend who gave 150% in everything he did. David left this world doing what he loved; working. He will be missed by everyone who knew him.

David is survived by his loving wife Stephanie Bell and children Colton Michael Jackson and Morgan Nicole Cranford. He is also survived by his parents Robert and Shelly Jackson of Chesapeake Beach, mother in law Judy Bell of Owings, brothers Robbie Jackson and wife Molly of Jefferson, MD and Brandon Jackson of Chesapeake Beach, grandparents Louie and Cathy Humphreys of Lusby, Tommy and Marilene Hardisty of Solomons, and Don and Dana Jackson of Bedford, VA, half-sister Kaitlyn Flynn, half-brother Dustin Flynn, his dogs Hope and Lola, many aunts, uncles, and cousins, and all of his Owings Outlaws family.

My deepest and most loving sympathy to Shelly, Robert, Robbie, Brandon, Stephanie, Colton, Morgan, and Judy. We loved David so much and will miss him dearly. Our family gatherings will never be the same again without him there. He will, be with us in our hearts and spirits. May this bring you and all of us peace. Love, David’s Aunt Marilyn and Uncle Jean

I am so sorry for your loss. He will be missed by everyone, he was a very nice person. RIP David…Love Bonnie Windsor

Our dearest sympathy to Shelley, Robert and all their extended family. We were fortunate to have met David and spent time with him at family gatherings. We will never forget David’s gorgeous smile and twinkling eyes, they will stay with us in our memories forever. We pray for you all at this difficult time.

I mostly knew him through the many stories his mother, Shelly shared. He was a proud family man, a man of integrity and of kind heart. For those blessed to have known him well, he will be dearly be missed. My heart is with you at this time of great loss.

Don and Dana Jackson
There are no words to relieve your pain. Except for God has his arms around you and David is with the Lord. Bless you all.

My heart brakes to hear this news today. My thoughts and prayers are with you. I can’t imagine the heartache that you’re all experiencing. Shelly I love and miss you all so much and I wish I could just hung each one of you.

Louie , Cathy, Shelly. My heart is breaking for you .I am so sorry and know there are no words to express the grief.. Take care of each other…..Flo❤️

My deepest sympathy. For. Your painful loss. I will always have fond memories of seeing David out in the field of our occupation as well as around the hall. Yes he gave 150% in all of his endeavors. I was fortunate to know him. May god keep you all in this painful time. Daniel j Zealberg is 5 dc

Stephanie and Colton.
I am so sorry to hear about David. Please know that we are here for you. if theres anything we can do. David is now with the lord and he will be watching over you both. Rest in Peace David. Fly high.

Losing someone like this is such a hard thing to bear. My heartfelt condolences go out to all of you. Uncle Don and Dana, Aunt Marilene and Tommy, cousins Debbie, Marilyn, and Robert. May God shower you with many blessings in this difficult time of your lives. Love and miss all of you.