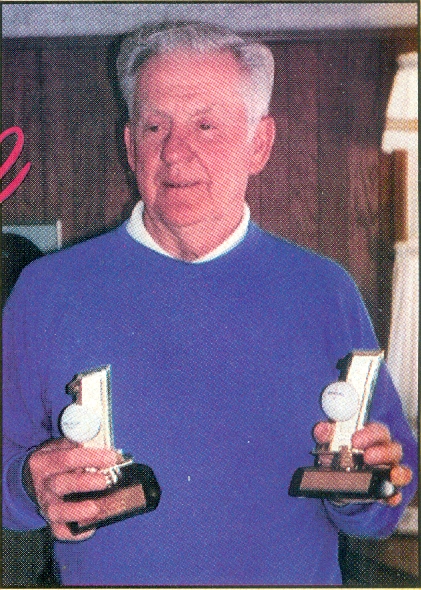 Charles Butler “Bucky” Johnston, 95, of Tracy’s Landing passed away March 25, 2020. Born August 4, 1924 in Washington, D.C., one of eight children, to Charles W. and Virgie (Butler) Johnston. Bucky attended Eastern High School and left during his senior year to join the United States Army Air Corps during World War II. While in the service Bucky ran 50 bombing missions and survived two crash landings. He was honorably discharged as Staff Sergeant on September 15, 1945. Bucky was employed as a firefighter with the D.C. Fire Department from January 7, 1946 until November 1, 1971, retiring as Lieutenant. He married Audrey Mae Perry on August 24, 1947. He was a member of the American Legion, the Elks Club, and the GMA Golf Club. Bucky was an avid golfer and had 5 hole-in-one’s during his lifetime. He also enjoyed playing cards and horses. Bucky was a true gentleman and will be missed by all.

Bucky was preceded in death by his wife Audrey on June 12, 1990. He is survived by his sister Mary Jane Beamer and numerous devoted nieces, nephews, and great friends, especially Hamilton “Ham” Smith and John Jaynes.

In lieu of flowers it is requested that donations in Bucky’s name be made to Hospice of the Chesapeake Foundation, John and Cathy Belcher Campus, 90 Ritchie Highway, Pasadena, MD 21122.

Given the Coronavirus pandemic, services and burial is limited to family only. A celebration of life will be held at a time and place to be determined after the health crisis is over. You can send your sympathy in the guestbook provided and share it with the family.

Uncle Bucky rest in peace. You will surely be missed by many many people. You were a very a positive role model for so many. May you party with the family members that departed before you. Love, Debbie and Odell Bondurant

A true gentleman. Will be loved and missed by many. Rest in peace Bucky.

Uncle Buck was a second father to me. He has always been there ever since I was little guy. Always encouraging me and looking for the best in me. His openness and joy was evident in all who he came in contact with. He was a gentleman’s gentleman. He was my hero. I will miss him more than words can say.

Rest In Peace Uncle Bucky. You are loved by many and will be missed dearly.
Love,
Chris and Tracy Carnes

Uncle bucky and aunt audrey raised me for the first 5 years of my life.They were two of the greatest people I ever met.RIP LT Johnston.

Bucky was a class act and super nice guy I met him 20 plus years ago at the Green Turtle in Edgewater, he told me when I first met him about his Military and Fire Department Career and I enjoyed his stories so much because I never had a Grandfather to chew the fat with like I did with him. Bucky would stop by the Green Turtle in Edgewater as a pit stop before he went home after visiting the track and that’s how we met, he was always willing to buy me and my wife a round of drinks when we saw him especially after he had won at the track. I am so glad that I got to meet this Kind and Gentle Soul of a Man year’s ago he truly was an American Hero with his Dedication to the United States and his career with the D.C. Fire Department God Bless You Bucky You will Truly be Missed.

Uncle Buck you will be missed immensely by many. I always say to everybody that if I could be half the  gentleman that you were known as I would to be known as a gentleman and a half. The time that we have spent together was very special to me . The early mornings on the Chesapeake Bay in the Patuxent River fishing with you and Uncle Charlie can never be replaced. I love you. Rest in peace my friend.

Bucky,
I feel so blessed that with John and Earl, we were able to fulfill your request to be home for your final months. This time only reinforced what I already knew and that is that you were a man of great humility, pride, dignity and class. A true gentleman. You were always thanking us for spending our time with you but it was you who honored us with the gift of your friendship. I will miss that twinkle in your eyes but I take great comfort in knowing that you are now reunited in Heaven with your beloved Audrey. Yours was a life well lived. May you rest in eternal peace.

We were blessed beyond measure to have known Bucky and thankful that God put him in our life. May you rest in eternal peace dear friend because you certainly earned it by being a true gentleman to the end.

He was the epitome of class, a true gentleman, an astute judge of horses and an accomplished golfer. I regret neither Chris nor I had the opportunity to play a round or more with him.

His respect for others, be they strangers or long-time friends, always prevailed. A better man would be hard to find. His smile and humor at a family celebration at Pirates Cove in Galesville will always be a pleasant
memory.

So sorry to hear this… he was a true gentleman and I loved Buckys so much… he use to come in the American Legion when I worked there and then Billy & I loved seeing him at Traders all the time … it’s so sad to hear this…. I heard from my friend & thank God I could write something about such a nice wonderful guy…He will truly be missed

Sometimes people come into our lives, leave footprints, and we are never the same. Uncle Bucky you are one of those special people… sweet, kind, loving nature. I’ll never forget the great hugs I would get from you and special talks we had. I love you always! 😘

Bucky was a great friend and neighbor. We are going to miss him very much. He was always positive, happy, kind, and gracious. The kids loved running to his house to visit and always came home with some type of candy. We will miss his war stories and how he checked on everyone in our family to see how we were and what we were doing. Fond memories include him driving through the neighborhood slowly watching for kids and rolling down his window with a huge smile, wave, handshake, or hug and his little birthday party last summer.
Bucky, we love you and it was a true blessing to know you.
We hope you are dancing with Audrey once again.
Mike, Julie, Brian, Amy, and David Thames

Sweet Uncle Bucky
You were such a kind and caring man. Always asking how I was and always checking on your baby sister and sending your love to her. Talking to you always brightened my day. Your last words to me were “Give shimma babe my love “ I told her and it made her smile. RIP Uncle Bucky
Your baby sisters baby girl ❤️

Uncle Bucky was a true role model. He showed me at a young age that you can be A man and be gentle. His picture should be in the dictionary under “Gentleman “. He has left an ever lasting impression on me. A true American Hero. Mission accomplished. Rest In Peace.