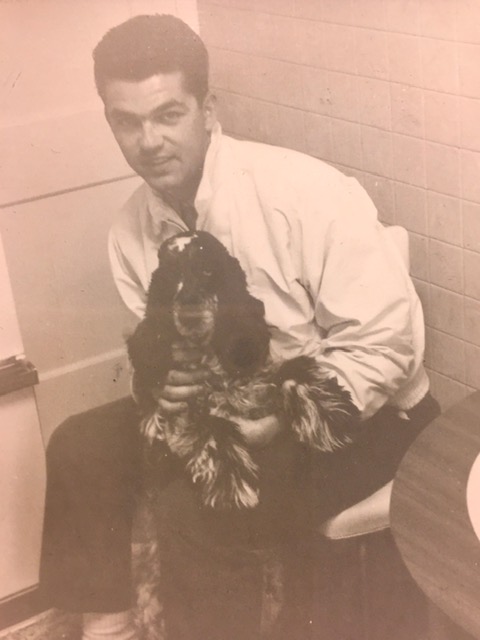 Bob Lutz passed away peacefully at Burnett Calvert Hospice House on July 26, 2020. Bob loved the game of golf – teaching youngsters how to play, setting up tournaments at the country clubs where he worked as a pro, playing the game competitively, watching Tiger perfect that swing on TV, or going to the driving range and hitting a bucket of balls. Years ago, I was his “caddy” (AKA sister-in-tow) for nine holes during a pro-am tournament and witnessed his skill, integrity, and graciousness up close. Over the course of his life, he lived in many places, but The Green was his true home.

Robert Smith Lutz was born June 25, 1942. After finding college not to his liking, he became a successful salesman for General Mills and, fast forward, the General Manager of Fox Chevrolet. I remember his calling me one day and saying he had to quit; firing people was too painful. Thus, began three decades of Bob living his dream of working as a golf pro.

If you befriended Bob, he was eternally loyal and loving.

He took his car for repairs only to Scott Strickler, who Bob bragged about because Scott took such good care of him. A couple months ago Scott gave Bob a new loaner Ford while Bob’s car was in the shop. It was like Christmas had come early!

The saints who were his best friends and who sometimes saved his life were two unselfish and accomplished gentlemen, James Jackson and Tommie Miller. Bob would want them to know how much he loved and appreciated them.

If Bob thought he owed you money and you thought otherwise, you would often discover random cash stuffed into your pocket or purse. He enjoyed breakfast at Trader’s and his favorite dinner was the end cut of roast beef at the Moose. Every Christmas Day he drove alone from Maryland to Ardmore, Pennsylvania to visit our parents’ graves. He was stubborn and sentimental, gregarious but a loner, and though he hated cats, last month he sent two toys for my feline pets.

He was a dear brother to me and I will miss him.

We were fortunate to have known Bob for a good portion of his life.

Throughout all the time that we knew Bob, he was a gentleman and an excellent golfer – loved the sport!

For those of you who like the game, isn’t it exciting to see the ball soar into the sky in a long arc, a perfect shot that you just know landed close to the cup, or maybe even made a hole in one? Of course, since the cup is sometimes beyond sight of your swing, you don’t know if the hoped-for miracle occurred until the putting green comes into view.

Now, with thanks to his sister for her story, we like thinking of the above scenario as an apt metaphor for Bob’s life.
He was very dear to us and we will miss him.