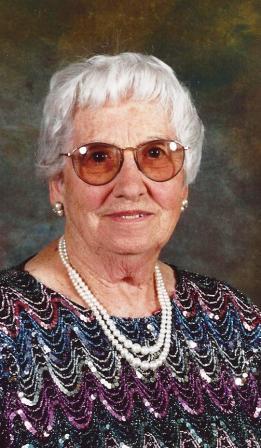 Zelma Juanita Hicks Margelos of Solomons Island Maryland Born Feb. 5, 1914 died May 18th 2013 at University of Maryland Hospital in Baltimore, Maryland. She was the wife of the late Peter Andrew Margelos.
Zelma Juanita Hicks Margelos, a retired USA government employee, daughter of Clarence Earle and Daisy Irene (Darland) Hicks, was born on a farm in Poweshiek County, Iowa, USA, 5 February 1914. As a farm girl, she was active in 4-H Club and a member of the 1929 champion county demonstration team competing at the Iowa State Fair. After graduation from Montezuma High School in 1931, she attended the Murphy school of Shorthand at Oskaloosa, Iowa; completed a rural school normal training course at Iowa State Teachers College, Cedar Falls, Iowa, and received a teacher’s certificate in 1933. Temporary employment included work in a law office and the county office of the Federal Government’s corn-hog farm support program. She served as office assistant of the combined Mahaska County Farm Bureau and County Extension Service office, Oskaloosa, Iowa, 1934-1941. Her Federal civil service career started as a clerk-stenographer with the Agricultural Adjustment Administration of the U.S. Department of Agriculture in 1941.During her 31 years of Government service, she held numerous positions in several agencies of USDA. She served as an administrative and an information specialist involved with research and preparation of informational materials and assistance in the preparation of speeches and articles for Secretaries of Agriculture. She served as the 1954 chairman of the metropolitan secretarial workshop, lectured on executive secretarial training before a group of French Business school professors visiting USA under the sponsorship of the French Ministry of Education and the U.S. Foreign Operations Administration. She served as a member of the boards of the USDA Welfare and Recreation Association and the USDA Records Council, serving as secretary on both boards, and served as a member of the Departmental Committee on Office Techniques and Operations of the USDA Graduate School 1955-1959. After office working hours, she served as an American Red Cross Nurse’s Aide during World War II at Garfield and Gallanger Hospitals, receiving a Certificate of Recognition from the District of Columbia Civilian Defense. She was among two thousand women invited to the the 1949 White House Garden Party honoring women holding executive positions in Government. She held membership in the National Secretaries Association, the D.C. Chapter of Business and Professional Women, the Iowa State Society of the District of Columbia, served on the Drum Point Property Owners’ Association Board as public relations chairman, also life member of Beta Sigma Phi, National Association of Federal Employees and Disabled American Veterans Auxiliary, and a member/volunteer of the Calvert Marine Museum in Solomons MD. She is also a member of the Circumnavigators Club, having sailed around the world several times. She compiled a “Hellenic Recipes” cookbook in 1981 for the St. Theodore Greek Orthodox Church and revision in 1983. She met Peter Andrew Margelos at a Washington, D.C. dance for military servicemen in 1942 and they were married in 1960. They sailed on Queen Elizabeth 2 in 1990 on the Cunard 150th anniversary cruise when Queen Elizabeth boarded the ship in the Solent after the Royal Review of Cunard’s Fleet. Zelma also sailed Queen Mary 2 maiden voyages in 2004. She was a founding member of the American Immigration History Center at Ellis Island, the American Air Museum in England, and the Ward Foundation for the Ward museum. She was listed in the World Who’s Who of Women 1992, 1993, and 1993/94; Five Thousand Personalities of the World 5th and 7th additions Contemporary Who’s Who in 2003; and the International Directory of Distinguished Leaders 9th edition. Her hobbies included: millinery, textile and china painting, sewing and cross stitchery, landscape gardening, and collecting magnets and spoons from around the world.