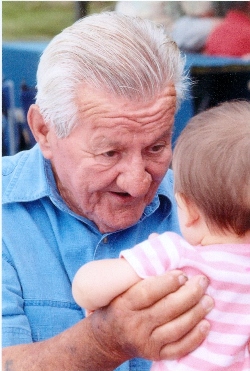 William Truman “Bill” Lohr, Jr., 87, of Holland Point, North Beach, MD passed away November 14, 2012 at Anne Arundel Medical Center in Annapolis, MD. Bill was born September 24, 1925 in Washington, D.C. to William T., Sr. and Nora (Wood) Lohr. Bill was raised in the District and attended St. Theresa’s Catholic School in Anacostia. He served in the US Coast Guard from January 8, 1943 until being honorably discharged November 27, 1945 as a Seaman First Class. He was employed as a gas fitter and traveled due to his work. He had settled in Albany, NY where he lived for 17 years. He met and married Norma C. (Ford) Williams, and they were married October 18, 1974. Bill and Norma lived in Brandywine, MD and in 1975 moved to Holland Point. Bill was employed as a steamfitter with the Steamfitters Local 602 in Washington, D.C., and had been retired since 1987. Bill was an Honorary Life Member of Stallings-Williams American Legion Post 206 in Chesapeake, Beach, a member of the Ocean View, DE V.F.W., and a past member of the Deale Elks Lodge. Bill was an avid fan of the Washington Redskins, enjoyed boating and fishing, and in his leisure time enjoyed tinkering with projects in his garage and helping others.

Bill was preceded in death by his parents and by siblings Charles Lohr and Mary Frances Coyle. He is survived by his devoted wife Norma and five children, Laura Shaw and husband Michael of Hudson, FL, Lisa Buck of Clarksburg, MA, Linda Gatewood of Davidsonville, Steven Williams and wife Linda of Rose Haven, and Phyllis Fox of Churchton, MD. He is also survived by seven grandchildren, six great-grandchildren, and sisters Regina Bohannon and Ruth Hoehl, both of Clinton, MD.