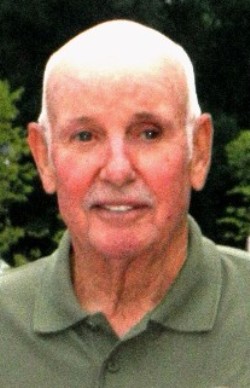 William Reynolds “Bill” Phelan, 78, of St. Leonard, MD passed away November 4, 2012 at Washington Hospital Center in Washington, D.C. He was born February 2, 1934 in Washington, D.C. to Donald William and Pauline Mary (Reynolds) Phelan. Bill was raised in University Park, attending St. Jerome’s Elementary and Northwestern High Schools. He was an all-star athlete receiving many awards and even went on to pitch in the minor leagues for a farm team of the Cincinnati Reds. He was a professional firefighter for Prince George’s County for twenty three years. Bill was also a volunteer firefighter for the College Park and Hyattsville departments. He was a member of the Firefighters’ Union, Local 1619, and the Greater Washington Umpire Association. Bill was a thirty year volunteer for the P.G. County Fire Department’s charity softball tournaments benefiting the Muscular Dystrophy Association.
He was an avid fan of the Washington Redskins and a faithful supporter of local sports, especially the Huntingtown High School Hurricanes.
He was preceded in death by his parents. Bill is survived by his wife Frances “Fran” Phelan of St. Leonard, a son Robert William Phelan and a daughter Dianne Marie Pastelak and husband Nicholas both of Prince Frederick, MD. Also surviving are grandchildren Sarah, Kelly, Jason and Shannon Phelan and Kathryn Pastelak and many, many friends.