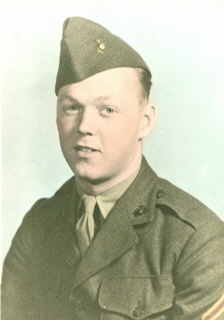 William Lee “Billy” Sears, age 88, of Owings, MD passed away February 20, 2013 at Calvert County Nursing Center in Prince Fredrick, MD. He was born in Paris, now part of Owings, MD on February 15, 1925 to Stanley Lee and Nellie Lee (Walton) Sears. Billy was raised on his family’s farm and attended Calvert County Schools. He married Mary Virginia Phipps in Forestville, MD in August 1943. Bill enlisted in the United States Marine Corps August 14, 1943 and served until being discharged as a Private First Class on May 12, 1945. After his discharge from the service Billy returned home and worked at Owings Lumber Company until 1955 when he went to work for the Maryland State Highway Administration. He retired as Senior Shop Clerk with the SHA in 1984.

He was preceded in death by his parents, a sister Margaret Smith and a son James W. Sears. Surviving are his wife Mary V. Sears of Owings, MD, a daughter-in-law Nancy Lee Sears, grandsons James W “Billy” Sears II and his wife Tracy, and Phillip S. Sears and his wife Shannon, and five great-grandchildren Cody, Kyle, Kelsey, Kylie and Sammy, all of Lusby., MD.