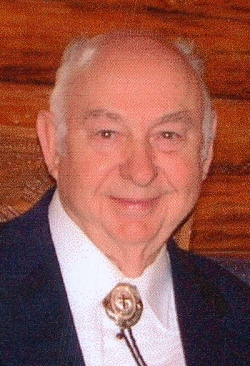 William Lawrence “Bill” Meekins, 88, of Lothian passed away January 2, 2014 at Anne Arundel Medical Center in Annapolis. He was born November 10, 1925 in Wanchese, North Carolina on Roanoke Island in the Outer Banks to Mary Levina (Tillett) and Joseph Gideon Meekins. He was raised in North Carolina and graduated from Elizabeth City High School in 1943. He then attended Newberry College in South Carolina, Notre Dame University in Indiana, and George Washington University. Mr. Meekins studied engineering and became a licensed Professional Land Surveyor. He entered the United States Navy and served in the South Pacific aboard the US Ship Y202. He married Donna C. Ray on July 2, 1949, and they lived in Washington D.C., La Plata, District Heights, and settled in Lothian in 1968. In 1951, he opened W.L. Meekins, Inc., a land surveying and engineering firm in Forestville, which is still operated by his son and daughter. Mr. Meekins was a member of Wesley Chapel United Methodist Church in Lothian. He taught Sunday school for over 50 years, was a lay leader, and was a soloist in the choir. He was also a member of the Maryland Society of Surveyors. In his leisure time, he enjoyed hunting, traveling, and spending time with his family.

Mr. Meekins was preceded in death by his parents and a brother Marvin Hester Meekins. He is survived by his loving wife Donna R. Meekins, a daughter Karen M. Domeier and husband Patrick, and a son William L. Meekins, Jr., and wife Linda, all of Lothian. Also surviving are grandchildren Caleb Domeier, Kira Winkelstein, Chelsea Jeffries, Jeff Meekins, Laura Meekins, and Rachel Livingston; great-grandchildren Elliott and Violet Domeier, and a sister Levina Fleming of Tulsa, OK.