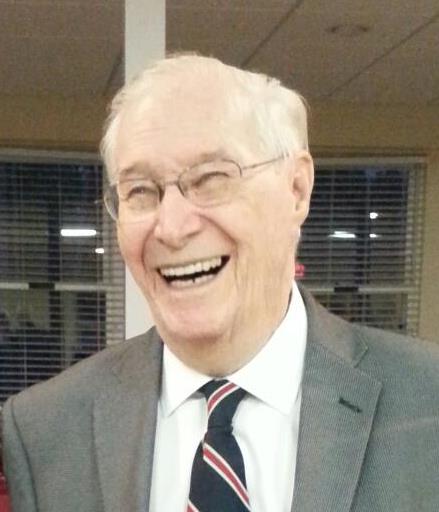 William Kenneth “Bill” Barrett, Sr., 94, of Chesapeake Beach passed away December 25, 2016 at his residence. He was born May 9, 1922 in Jersey City, NJ to William James and Grace (White) Barrett. Bill was raised in Englewood, NJ and graduated in 1939 from Dwight D. Morrow High School where he ran track. He graduated from Newark College of Engineering, which later became Rutgers University, in 1943 with a degree in mechanical engineering. After college Bill joined the United States Navy and was stationed at the Naval Research Lab at Randle Cliffs. While there, he met Betty Robertson and they were married November 17, 1945. They made their home in Chesapeake Beach until moving to Mesa, AZ in 1951, to Tulsa OK in 1953, and to Springfield VA in 1957. In 1970 they settled in Huntingtown, where they lived until returning to Chesapeake Beach in 1990. When he retired in 1985, Bill was the head of the research division of the United States Postal Service, through which Bill had several inventions and patents. Bill was always an active member of the American Legion Stallings-Williams Post 206 in Chesapeake Beach where he served two terms as Commander and held many other offices throughout the history of the American Legion. In his leisure time Bill enjoyed “working” at the American Legion and spending time with family. Later in life his time was enriched by his special friend Mary LeMay and her wonderful family.