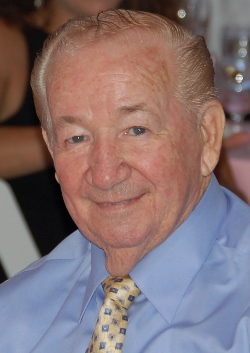 Bill was born May 3, 1928 in St Mary’s, MD to Holland and Myrtle Abell. He worked for Giant Food for over 50 years. He started working while still in high school and achieved the rank of Supervisor for Giant Food. He leaves behind his wife Catherine (Patsy) of 65 years. They met in grade school at St Joseph’s in Morganza, MD, where he would pull her pig tails. Fate would bring them together later in life. Bill and Patsy married while Bill was on leave from the Army. They built their family around love of each other and God. They have 12 grandchildren: David, James, Tiffany, Brian, Justin, Joel, Ashley, Gary, Shelby, Will, Christopher and Matthew. They also have 10 great-grandchildren, ages 7 to an upcoming addition due in November: Kyle, Weston, Jerry, Ryan, James, Hayden, Clara, Karson, Eleanor, Owen and one soon to be announced.

Bill was quick to tell a joke or story. He enjoyed making people laugh. He will be greatly be missed by his family and remembered by many.

In lieu of flowers memorial contributions may be made to Operation Smile.