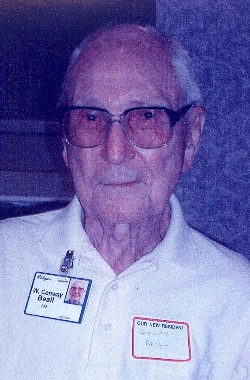 William Conway “Connie” Beall, 97, of Mitchellville passed away September 30, 2015 at his residence. He was born February 4, 1918 on the Dumblane family farm in Melwood, MD to Rufus and Mary Frances (Fowler) Beall. He graduated from Marlboro High School in 1935. He married Laura Buck on August 23, 1940 at Trinity Episcopal Church in Upper Marlboro. Connie was Postmaster of Upper Marlboro prior to his retirement in 1978. He was the Past Master of Centennial Lodge 174, the Scottish Rite and Order of the Eastern Star Upper Marlboro Chapter 61.

Connie is survived by his wife Laura B. Beall, nieces Dolly Davis of NJ, Jo Ann Walker of NC, and Marikay Shaw of Dunkirk, and nephews James Reed of Nevada and Lewis Buck Jr. of Upper Marlboro. Also surviving are great-nieces Alex, Kelsey and Janice Freeman. He was preceded in death by sister Janice B. Shaw.