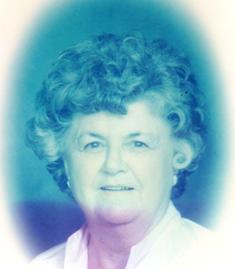 Wilhelmina “Billie” Barr Gwynn Winstead, of Saint Leonard, Maryland, beloved wife, mother, grandmother and great-grandmother passed away peacefully surrounded by the love of her family November 9, 2013. Born April 7,1920 in Suitland, Maryland to Dorothy von Osterman and James Barr and raised by her grandparents, Wilhelmina Fritz and George von Osterman, she graduated from Surrattsville High School (she was the last living member of the 1937 Class) and Strayer College where she was a member of Sigma Eta Sigma Honor Society.
During World War II, she served her country by working at the War Department. She later was bookkeeper for Clinton Motor Co, a family automotive business and then founded her own corporation, Clinton Business Services. Billie was very active in the community as a 4-H leader for 11 years, President of Surrattsville P.T.A., Voice of Prince George’s Toastmasters Club and Surratt Stage Door Theater group. She also volunteered at the Surratt House.
She spent most of her life in Clinton, Maryland raising her family and her summers in Calvert County at her beloved Island Creek home. She was known as “Billie“ by her friends and “Big Momma“ by her family. Later in her life, she spent winters in Ormond Beach, Florida. Billie had many dear friends and spent many a day playing bridge, fishing and socializing. Each and every summer, however, she returned home to Maryland to open the Riverhouse for her family and friends creating a life time of great memories for all concerned.
Billie was predeceased by husband, William R (Jack) Gwynn and Luther V. Winstead, her son Bill Gwynn and her companion of 28 years Arthur Owisanny. She is survived by beloved daughters Jackie Ball, husband Jess, Bette Gilbert and Gay Gwynn and beloved step-daughters Eleanor Ellison and Mary Avis Mc Laughlin. Her two grandchildren Jay Ball and Jamie Bohne-Richardson and her husband, Gex Richardson, gave her four great-grandchildren Edward “TJ” Bohne, Connor Richardson, Alexandra “Ali” Bohne and Colton Richardson.
We will be honoring “Billie” at Rausch Funeral Home on Broomes Island Road Port Republic, MD Thursday November 14, 2013 from 1:00p.m.-4:00p.m. The hour of service, in the Funeral Home will start at 11:00 a.m. on Friday November 15. Followed by an open house at her daughter Jackie’s house. The Burial will be at Cedar Hill Cemetery in Suitland, Maryland on Saturday November 16 th at 10:00 am.