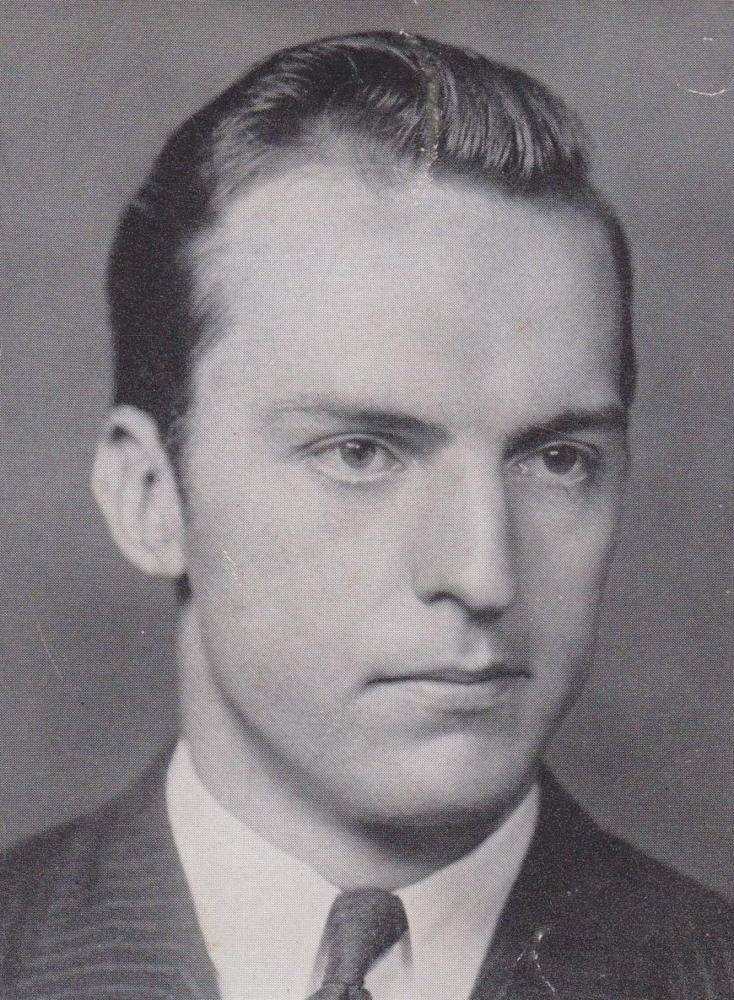 Wilfred George Burgan, Jr. (Bill) was born in Washington D.C. on Flag Day, June 14, 1919, a member of America’s Greatest Generation.
Bill Burgan attended Sacred Heart School, St. Johns College High School and Catholic University of America, all in Washington D.C.
At CUA (37-41), he was known as “Hard-wurgin Burgan”, due to his studious habits. He was the founder of the famous intramural campus club named for his locker, “Locker 209”. Legend says they won many intramural sporting contests and were both feared end envied by many.
He graduated from CUA obtaining a BA in Aeronautical Engineering in 1941. Following graduation, he began work immediately for the Glenn L. Martin Company of Baltimore Maryland, initially working on design of military aircraft.
Bill Burgan married Ann Virginia Zinn, in Washington D.C. on October 5, 1943. Their seven children, all surviving are, Katherine Gamache (NY, NY), John Burgan (Lusby, MD), Robert Burgan (Portland, OR), Stephen Burgan (Orlando, FL), Michael Burgan (California, MD), William Burgan (Palm Harbor, FL) and Richard Burgan (Orlando, FL). Bill Burgan has 13 grandchildren and 6 great grandchildren.
While employed for Martin, he was involved with engineering and design of many aircraft between 1941 and 1959, including the P6M Seamaster, the last Martin Aircraft. A crash investigation of the P6M Seamaster following a testing accident on the Patuxtent River, MD, in 1955 required a stay near Solomon’s MD, a place he would live during his retirement years.
In September of 1959, the Burgan family moved from Towson Maryland to Dommerich Estates in Maitland Florida. At Martin Orlando, he was involved in development of missiles and guided weapons. Bill was involved in the development of the Bullpup, Walleye, Patriot, Copperhead and Pershing missile programs among others.
In the Maitland community, Bill helped organize and start the Maitland Little League, serving as its first President from 1963 to 65. He also served as the first Recreation Director (volunteer) for the City of Maitland in 1964-65. Bill was also a member of the men’s choir of the St. Mary Magdalene Catholic Church in Altamonte Springs from 1960 to 1974 where the family attended.
Bill was an accomplished golfer and won many awards competing in the Martin Orlando Golf Association (MOGA). He retired from the company known today as Lockheed Martin following 42 years of service in 1983. Bill and Ann Burgan moved to Sugar Mill Golf Community, New Smyrna Beach, FL in 1983. Ann Burgan received a diagnosis of cancer and passed on June 14, 1984.
Bill scored his age at Sugar Mill C.C., several times in his seventy’s. In 1998 Bill moved to the Solomon’s area in southern Maryland to be near his then retired son John and weekender son Mike.
In 1999, the extended Burgan family celebrated Bill’s 80th birthday with a grand party including all members of the family and other invited guest at the clubhouse on Drum Point.
Sadly, Bill Burgan’s long and well lived journey came to a peaceful end on December 14th, 2013, while resting comfortably at the Solomons Nursing Center, Dowell, MD.