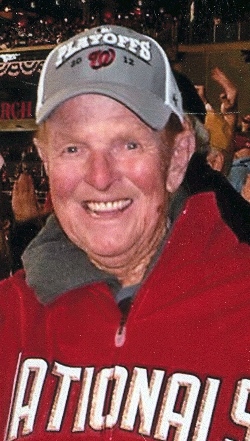 Wellington Leo Kitching aka “Willie” or “Wat”, age 76, of Owings, passed away October 11, 2013 at his residence. He was born in Crisfield, MD on May 1, 1937 to Ernest Leo and Emily Frances (Evans) Kitching. He was raised across the Tangier Sound on Smith Island. Willie entered the United States Navy in 1955 and served until 1957. He was stationed in Norfolk, VA and as well as other duty stations. As a young boy, he explored and learned the ways of the island and water. He followed the family and island tradition of going to work as a waterman. As a waterman, he learned to navigate the Chesapeake Bay, Delaware Bay and Inter Coastal Waterway. The water was not only a livelihood, but a way of life. The water was a passion he developed and transferred to others. While working on the water crabbing in the summer of 1987, he severely injured his hand and had to retire from the water. After recovering from his injury, he went to work installing commercial gas pipe at which he worked until entering semi-retirement in 2008. At this time, he worked part-time at Sneade’s Hardware and Rod-n-Reel. Willie first met Stephanie “Connie” Rogers in the spring/summer of 1977 and they were later married on May 2, 1987 in North Beach, MD at a pool side wedding. They resided in North Beach until moving to Owings in August 2004.

Willie was preceded in death by his parents, and a brother Joe Kitching. He is survived by his wife Stephanie “Connie” Kitching; sons Gary W. Kitching and wife Karen of Crisfield, MD, and John M. Curtin of Washington, D.C. Also surviving are a brother Harry Kitching of Millsboro, DE, and a sister Pam Tyler of Crisfield, MD.