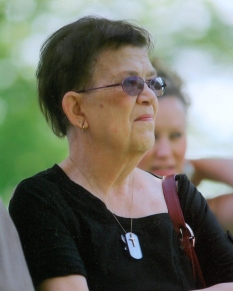 Virginia Mary “Ginny” Mackey, age 68, of Chesapeake Beach, MD passed away April 27, 2012 at her residence. Ginny was born September 25, 1943 in Brooklyn, NY to Frank J. and Ethel G. (Cade) Carroll. She was raised in Brooklyn where she attended public schools and graduated from Prospect Heights High School in 1961. She married William F. “Bill” Mackey on June 13, 1964 and they lived in Brooklyn, NY and Suitland, MD until moving to Chesapeake Beach, MD in 1977. Ginny worked as a clerk at the J.C. Penney department store in Forestville, MD and after moving to Chesapeake Beach was the manager of the former Sea Breeze Restaurant in Chesapeake Beach. She was a devoted homemaker, wife and mother, and loved spending time with her children and grandchildren. She enjoyed shopping, especially at dollar stores. She was also fond of her dog J.P.

Ginny was preceded in death by her parents and by a son James Patrick Mackey. She is survived by her devoted husband William F. Mackey, Sr., sons William F. Mackey, Jr. of Chesapeake Beach and Kevin J. Mackey of Nanjamoy, MD; granddaughters Amanda Kathryn Mackey of Chesapeake Beach and Celenia Pennifill of Lusby, MD; a “step-daughter” LaWanda A. Blanchard of Lusby; and sisters Jean E. Vicari of Sparrow Bush, NY, Eleanor F. Carroll of Brooklyn, and Elizabeth A. Bassett of Spring, TX.