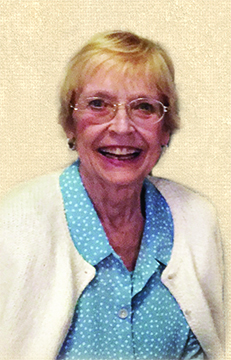 Ursula was born on March 1, 1942, in Washington, D.C., the fourth child of Mr. Ralph H. Dwan and Mrs. Mary Cochrane Dwan. She spent her childhood in Washington, D.C., attending Blessed Sacrament Elementary School (’55) and Georgetown Visitation Preparatory School (’59) before matriculating to Georgetown University School of Nursing. During her tenure at Georgetown, Ursula took a leave of absence to pursue her religious vocation, joining a community of nuns known as the Medical Mission Sisters. She completed her religious training at the Medical Mission Sisters’ motherhouse in Philadelphia before taking vows and returning to Georgetown to complete her nursing degree (’67).

After graduating from Georgetown, Ursula worked as a visiting nurse serving poor communities surrounding the D.C. area. In autumn 1967, she was sent by the Medical Mission Sisters to language school in Cuernavaca, Mexico, in preparation for a mission placement in Latin America. She completed her language training and was sent to Maracaibo, Venezuela, where she taught women’s health and practiced maternity nursing in a local hospital.

In Cuernavaca, Ursula met her future husband, Robert A. Jaeger, of Ft. Wayne, Indiana. Then a Roman Catholic Priest, Robert was a fellow student at the language school, and in spite of their clerical appointments, Robert and Ursula fell in love. After parting ways, they maintained a correspondence, and having disclosed their mutual intentions to exit the clergy, Robert wrote to Ursula asking her to marry him. She accepted.

Robert and Ursula were married in January, 1969, in Pittsburgh, Pennsylvania. They both worked at Mayview State Psychiatric Hospital before moving to Scranton, where Robert pursued his Master’s Degree in Rehabilitation Counseling at the University of Scranton. In 1971, Robert and Ursula adopted their first child, Jonathan. They returned to western Pennsylvania in 1972, settling in Peters Township, and later that year they adopted their second child, Anna. Their third child, David, was adopted in 1975. In 1977, the family moved to Amwell Township, to a house in the countryside outside of “little Washington.” Their fourth child, Nicholas, was born in 1978. They continued living in Washington County until 2008.

During her 31 years living in Washington, PA, Ursula was an active community member, volunteering for a variety of organizations, participating in and leading initiatives at Immaculate Conception Church, and advocating for and championing equality, women’s empowerment, and health, among other issues. She was a stay-at-home mother while her children were in school, later entering Duquesne University to pursue a Master’s Degree in Pastoral Ministry. Before she could complete the degree, she launched a parish-nursing program at Immaculate Conception and served as a minister to the sick and homebound.

In 2008, Ursula and Robert retired to her family’s cabin at Scientists Cliffs, a community located on the western shore of the Chesapeake Bay in southern Maryland. There she spent the remaining years of her life.

Ursula is survived by her husband, Robert, her children, Jonathan (Linda Lindsey), Anna (Charles Patrick), and Nicholas (Brenna Clair Thomas), her sister in law, Mary Dwan, and brother in law, Sam Ellsworth, as well as eight grandchildren, seven nieces and nephews, twenty-one grand-nieces and nephews, and many beloved friends and family members. She was predeceased by her parents, her siblings, and her son, David. She was a person of great faith, a lover of life, nature, and the arts, and an ardent believer in the power of community. Ursula will be missed dearly by the many persons whose lives she touched.