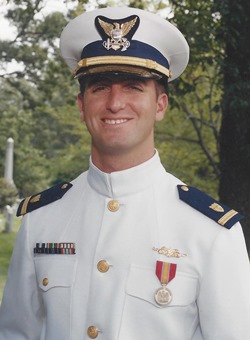 Thomas James “TJ” Hopkins, 41, of Chesapeake Beach passed away January 15, 2016 in Rockford, IL. He was born October 19, 1974 in Rockledge, FL to Thomas Young Hopkins and Babette (McConnell) Newman. TJ grew up in a Coast Guard family and lived in Florida, Georgia and Hawaii. He entered the Coast Guard in 1993 and attended the Naval Academy Preparatory School in 1994. TJ graduated from the United States Coast Guard Academy in 1999 with a Bachelor’s degree in Government. He married Anna Katrina Hager in July of 2000 whom he met while attending the Naval Academy Preparatory School. Following his graduation TJ served aboard the Coast Guard Cutter Rush out of Honolulu where he served as Deck Watch Officer and Boarding Officer. He later volunteered to serve with Coast Guard forces in Operation Iraqi Freedom aboard Coast Guard Cutter Wrangell, home ported in the Kingdom of Bahrain. He also served as deputy of the Maritime Intelligence Center in Miami, FL. TJ received his Master’s degree in Strategic Intelligence and was in charge of the counter smuggling analysis branch from June of 2009 until 2013. He then became the chief intelligence officer in San Francisco, a position he held from June of 2013 to November of 2014. TJ was an avid surfer and in his leisure time he enjoyed hiking, biking up Mt. Diablo, and trips to the beach. Most of all TJ loved his children and spending time with his family, especially his wife and kids.

TJ is survived by his loving wife Anna Katrina Hopkins of Chesapeake Beach; daughter Sophia Hopkins and son Tristan Hopkins; brothers Joshua Hopkins of Ewa Beach, HI and George Kent of Savannah, GA and sister Rachelle Diaz of Melbourne, FL. He is also survived by his mother Babette Newman and her husband Frank of Melbourne, FL and father Thomas Hopkins and his wife Debbie of Ewa Beach, HI; as well as his grandmother Peggy Green and her husband Bob of Cape Canaveral, FL and grandfather Thomas Hopkins also of Cape Canaveral, FL.

Interment services with Coast Guard Honors will be held at Arlington National Cemetery at a later date, not yet determined.