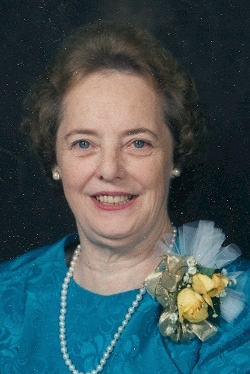 Theresa “Honey” Lottie Sweeney, 85, of Deale passed away May 26, 2014 at Country Home in Harwood. She was born February 26, 1929 to George and Eva Mae (Tippett) Kiefer. Theresa was raised in Capital Heights and educated in Prince George’s County schools. She married Thomas I. “Bingo” Sweeny on October 30, 1944 in Forestville. She and Bingo lived in District Heights, and then moved to Deale in 1989. She was a part-owner of County Miss Bridal in Upper Marlboro, until retiring in 2008. She was a former member of the Morningside Post 9616 V.F.W. Ladies Auxiliary. She and Bingo loved dancing and were usually the first ones on the dance floor, and the last to leave. Theresa also enjoyed traveling, cooking, and baking; her specialty was chocolate cake with chocolate icing.
She was preceded in death by her parents and her husband, Bingo, who passed away in 2010. She is survived by sons Thomas E. Sweeney and wife Sharon of Hollywood, MD, George I. Sweeney and wife Patricia of Deale, and a daughter Patricia A. “Patsy” Radtke and husband Skip of Deale. Also surviving are seven grandchildren, Tammy Shea and husband John of Mechanicsville, Carol Alfred and husband Robert of Chesapeake, VA, Becky Crow of Mechanicsville, Jennifer Reburn and husband Rich of Centreville, Melissa Hartling and husband Steve of Port Republic, Kimberly Tucker and husband Jerry of Prince Frederick, and Chris Sweeney and wife Christina of Centreville, and a sister Nita Morris and husband Al of LaPlata.