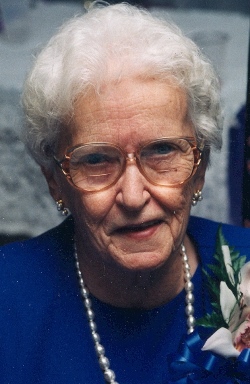 Theresa Cecilia Cecil, 99, passed away at the Calvert County Nursing Center December 5, 2013 after a brief residence there. She was born September 8, 1914 in Washington, D.C. to Hubert and Margaret (Ryan) McConnell. Theresa was raised in Washington and attended Holy Name grammar school and catholic high school in the District. She married Lawrence Cecil in 1931, and they made their home in Washington D.C. They moved to Marlowe Heights, MD in 1955 where she was primarily a homemaker. She was later employed in retail at the Hecht Company and the Fannie May Candy Store. Theresa and Lawrence relocated to North Beach in 1972, and he passed away January 31, 1998. Theresa had lived in an assisted living facility in Owings for several years. She was a member of St. Anthony’s Catholic Church and was active at the North Beach Senior Center. In her leisure time, Theresa enjoyed ceramics, crossword and jigsaw puzzles, cross-stitch and reading.