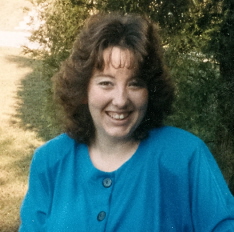 Theresa Anne Gandy, age 43, of Capitol Heights, MD passed away on April 1, 2012. She was born in Cheverly, MD on September 17, 1968 to Ira William and Rebecca Anne (Noell) Stanley. Theresa received her education in Prince George’s County public schools except for her senior year of high school. She graduated from Kellam High School in Virginia Beach, VA. She graduated from SANZ School in Washington as a certified medical assistant. Theresa was employed at various group medical practices before joining the staff at Southern Maryland Hospital. She was married to James A. Gandy in Upper Marlboro, MD on March 25, 1994. Theresa was an avid reader. She also enjoyed camping and spending time with her family.

Theresa is survived by her husband James A. Gandy, three children Mary Beth Diaz, and Justin and Kathryn Gandy. Also surviving are her parents Ira W. and Rebecca A Stanley and two brothers Billy Stanley and Nick Stanley and his wife Danielle, all of Capitol Heights, MD.