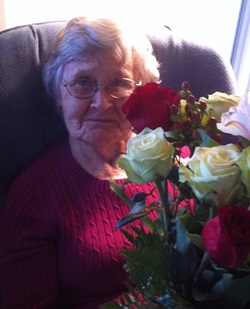 Thelma Odell Mauney, 96, of Huntingtown, passed away January 17, 2016 at her home, surrounded by family. She was born on December 14, 1919 in Gastonia, NC to Charlie and Maggie Gragg. Growing up as 1 of 9 children, she became known as the Spunky one. Siblings include, Marie Moore, William “Bud”, Robert, Walter, Hebert “Hub”, MaryLou, Donald, and George Gragg. She attended school until the 8th grade. She worked in the textile mills for a short time. At the age of 17 she met a handsome young fella named Sam and swept him off his feet. Not long after they married and had 5 children, Larry, Lloyd “Peanut”, Peggy, Brenda and Debbie. Around 1949 they moved from NC and the family she loved so dearly to the MD/DC area. While Sam was a self-employed contractor, Thelma was a Homemaker, Wife, Mother and Friend.
A member of Petworth Baptist Church and later Montgomery Hills Baptist Church.
She raised her family to value each other and to those that became part of her extended family. She instilled in her family generosity, kindness, fairness and love.
Her hobbies included gardening and sewing, but most of all NASCAR!
Her family continued to grow with 14 Grandchildren, 29 Great Grandchildren and 4 Great-Great Grandchildren.