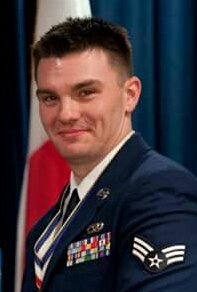 SSgt. Michael Alfred Proud, 27, passed away August 14, 2015. He was born April 2, 1988 in Neptune, NJ to Michael Ernest and Kathleen Marie (Bruderer) Proud. Mike grew up in Pennsylvania and graduated from Wyalusing Valley High School in 2006. He married his high school sweetheart, Ashleah, in 2007. Mike enlisted in the United States Air Force in 2008 and earned the rank of SSgt and was employed as an Air Transportation Journeyman. He was stationed in Incirlik, Turkey and during his 7 year military career he lived in Japan, Florida, and Pennsylvania. He also served two tours of Afghanistan and one tour of Qatar. In his leisure time, Mike enjoyed skiing and playing soccer and was a district champion in high school. Most of all, Mike loved being a dad and spending time with his family.

Mike is survived by his loving wife Ashleah E. Proud; daughters Ambrielle K. and Sophiel A. Proud; sisters Denise E. Smith and Jennifer L. Flowers of Bayville, NJ and his mother Kathleen M. Proud of Seminole, FL. He was preceded in death by his father Michael E. Proud.