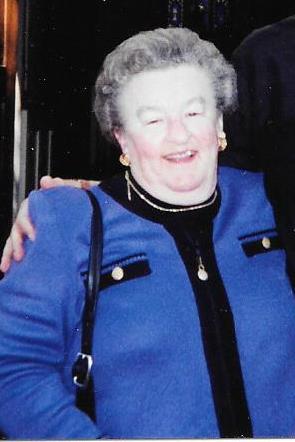 Shirley M. Hance, 87, of Prince Frederick, Maryland, passed away peacefully at Calvert Nursing Center on October 11, 2016. She was born on July 30, 1929 in Port Republic but moved with her family to Prince Frederick in 1946. Shirley was the fifth of six children born to Gourley and Daisy Hance and was the only girl. After graduating from Calvert County High School in 1947, Shirley went to work as a waitress at Rustic Farm Restaurant (now Adam’s). In 1955, she went to work as a cashier at the A&P grocery store and remained there until her retirement 30 years later. In her later years, she was a switchboard operator at Prince Frederick Motors and worked in that position for 15 years.

Shirley loved working with the public and there was a time when she probably knew every family in the county. She always had a smile on her face and would inquire about them when they came through her line at the grocery store. Many of the current generations in the county still talk about the “lady from the A&P” that they knew as children.

Shirley loved being with her family. She had no children of her own but treated all of her nieces and nephews as if they were her own children or grandchildren. She never missed a family event and was well known for taking pictures at many gatherings and events throughout the county. Her bedroom was full of her photo albums and each picture was labeled as to the event and the attendees. She was well known to share these photos with others. Shirley was always smiling and had a pleasant word for everyone – she never met a stranger and always made appoint to make everyone welcome. She loved to travel, read, go out to lunch with her friends and go to shows. For many years she could be seen out walking around her home. She loved her home and flowers and was always inviting others to visit. She was known for her famous chocolate chip cookies that she made for the Jousting Tournaments at her church and usually always had some in her kitchen.

A memorial service and celebration of Shirley’s life will be held on Saturday, March 25, 2017 at Christ Episcopal Church on Broomes Island Road in Port Republic, MD. Shirley was a faithful member of this church for over 70 years. The family will receive friends from 11-12pm followed by the service at 12:00 PM. Arrangements were provided by the RAUSCH funeral home of Port Republic, MD