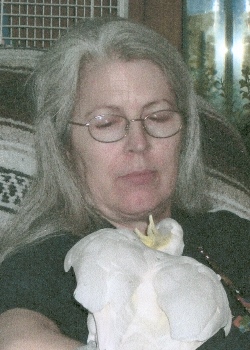 Sharon Marie Hulett, age 53, of Huntingtown, MD passed away suddenly February 3, 2014 at her residence. She was born December 16, 1960 in Havre de Grace, MD to Arthur B. and Marie M. (Keithley) Lincoln. She was raised in Harford County and attended the County schools. She joined the United States Army National Guard May 7, 1982 and the regular Army January 16, 1984. Sharon was married November 3, 1983 in Bel Air, MD to Thomas E. Hulett, whom she met while stationed at Ft. Bragg. Together Sharon and Tom served in the Army and they were stationed in North Carolina, Korea, Virginia, Germany and Texas. Sharon was discharged April 22, 1988 as a SP4. They moved to Huntington in 2001 after Tom’s retirement. Sharon loved animals and owned and cared for her Cockatoos and Cockatiels as well as her tropical fish. She also enjoyed traveling.
She is survived by her husband Tom of Huntingtown, mother Marie M. Coulter of Towson, father Arthur B. Lincoln of Wilmington, DE and brother Steve Lincoln of Baltimore.