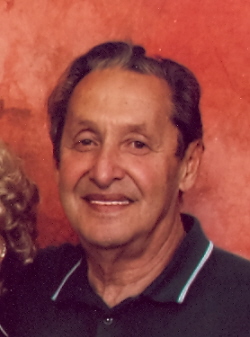 Salvatore “Sam” John Genovese, age 77, of Lothian passed away on February 11, 2012 at his home. He was born September 14, 1934 in Baltimore, MD to Joseph and Anna Frances (Bordine) Genovese. He was raised in Baltimore and attended Baltimore Public Schools. Sam married Faye Marie Kronawetter in Baltimore September 24, 1952 and they resided in Glen Burnie, moving to Huntingtown in the early 1980’s, then Lusby. Fay passed away July 26, 2002. He has resided in Lothian for the past several years. Sam married Evelyn Marie Saunders on December 23, 2003 and they separated in 2011. Sam was employed as carpenter with Bay Mills Construction Company. In his leisure Sam enjoyed hunting and fishing. He was a member of All Season Rod & Gun Club.
Surviving are his daughters Denise M. Weber, Debra (Debbie) A. Connell both of Lothian and Sandra D. Baunler of Macon, GA; three grandchildren; six great grandchildren and a sister Clara Jones of Rosedale, MD.