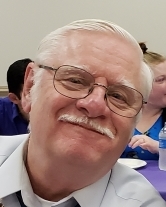 Ronnie Ray Eckard, 70, of Huntingtown passed away October 31, 2018 at his residence. He was born December 18, 1947 in Washington, D.C. to Raymond Walter and Christine (Boudinot) Eckard. Ronnie lived in Sunbury, OH and moved to Maryland when he was 7. He graduated from Surrattsville High School and attended Community College. While in college, Ronnie volunteered at Bryans Road Volunteer Fire Department. He later went to work as a Federal Fireman at Ft. Myer Fire Department in Arlington, VA, working in Arlington National Cemetery and The Pentagon. He retired from the fire department after 25 years of service. Ronnie married Vickie Crow November 12, 1983 and they lived in Harwood for 10 years before moving to Huntingtown, where they have lived for the past 25 years. Ronnie enjoyed watching Star Trek and being around his beloved Dalmatians.

Ronnie is survived by his wife Vickie Annette Eckard of Huntingtown, children Thomas Scott Eckard of Jacksonville, FL, Charles Howard Eckard and wife Pamela of La Plata, and Michael Gene Crow and wife Stacey of Edgewater and 7 grandchildren. He was preceded in death by his parents and daughter Ogee Priscilla Eckard.